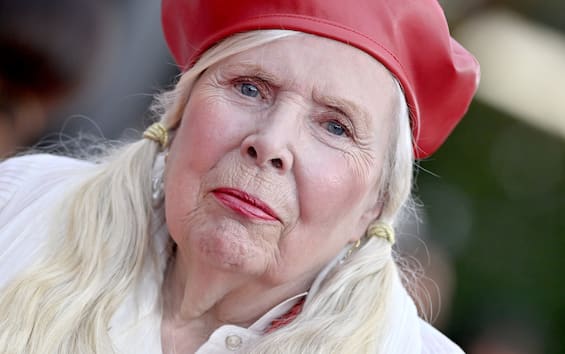 It’s now official: Joni Mitchell will perform in a concert after 23 years of absence from the live music scene.

The living folk legend will return to the stage as a headline after almost a quarter of a century of hiatus, performing at the Gorge Amphitheater in Washington next June.

The Canadian singer-songwriter (who, we recall, was hit by a brain aneurysm in 2015) officially announced the news, after the advances that Brandi Carlile had let slip: the American singer-songwriter and record producer revealed in recent days during a guest to The Daily Show that Joni Mitchell will return live in 2023.

Carlile herself will perform in a concert set in the same location, the night before Joni Mitchell’s live. Speaking of Washington’s Gorge Amphitheater, Brandi Carlile called it “one of the most beautiful clubs in the world”.
Carlile’s concert is always part of the event named after Joni Mitchell, a “two nights” renamed with the name of Echoes through the Canyon (better known as Joni Jam II).

The first Joni Jam official came when the singer made an unannounced appearance at the Newport folk festival alongside Carlile.
After that cameo, Mitchell told the young colleague: “I want to do another show … I want to play again.” These words from the great Joni Mitchell were the driving force behind the highly anticipated June 2023 event.
There have been many other Joni Jam sessions, organized at Mitchell’s house, but the one that will be organized next summer will be truly epochal.

The advances made by Brandi Carlile

And, always a The Daily ShowCarlile added: “No one has been able to buy a ticket to see Joni Mitchell play in 20 years … So (this event) is huge …”.

The last concerts of Joni Mitchell

The last time Joni Mitchell performed live as a headliner was 22 years ago. Her last official shows are those on the Both Sides Now tour in 2000.

In 2015, the musician suffered a brain aneurysm which undermined her ability to speak and walk. “I quickly regained my ability to speak, but I’m still struggling with walking,” Mitchell told Cameron Crowe in 2020. “But I’m a fighter. I have Irish blood!” She added.

In 2021 he received the Kennedy Center Honor. Last April you attended the Grammy Awards. She was named Person of the Year by the Academy Affiliated Charity MusiCares, plus she won the Best Historical Album award for her retrospective of her, Joni Mitchell Archives, Vol 1: The Early Years (1963-1967).

The Canadian singer-songwriter asked the platform to remove their albums.
“Irresponsible people are spreading lies that are costing people’s lives,” he said in an official statement.