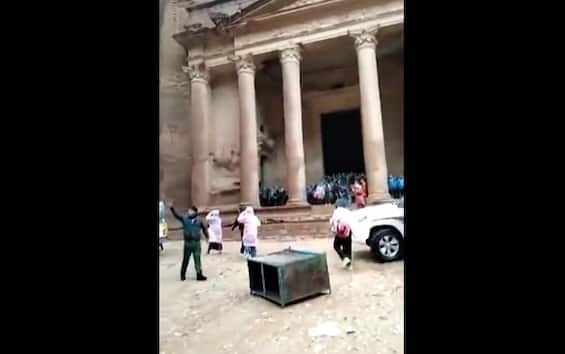 A sudden wave of bad weather hit Jordan, creating emergency situations. Heavy torrential rains have prompted the evacuation of the archaeological site of Petra, where a huge amount of water has flooded the narrow passages carved into the rock. Other floods were reported in the Amman area, on the shore of the Dead Sea and near the coast of the Red Sea. Groups of hikers were rescued by the emergency services while the authorities asked motorists traveling in desert locations to maintain maximum vigilance and to follow the instructions given by the authorities. Although the weather conditions have stabilized, Prime Minister Bisher Khasawneh has given instructions to still maintain a high state of alert and to provide assistance, if necessary, to tourists.

One of the seven wonders of the world

Built about 2000 years ago, Petra is an archaeological site in Jordan that began as a city of the Edomites and became the capital of the Nabatean kingdom. It was then abandoned in the eighth century and forgotten until 1812. Considered a unique monument thanks to its facades carved into the rock, in 1985 it was declared a UNESCO World Heritage Site and in 2007 it was recognized as one of the seven wonders of the modern world.