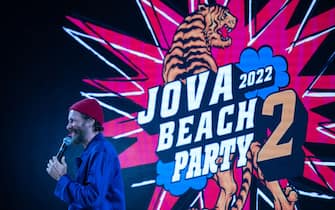 Jova Beach Party part son 2 July the zero date in Lignano Sabbiadoro. Not just a full calendar of concerts, but a real beach party to share with your closest friends. For this Jovanotti he decided to surround himself, during the 21 dates of his Jova Beach Party over 150 artists. Here are the most famous guests

Jovanotti will immediately replicate the first date in Lignano Sabbiadoro on the following day, that of Sunday 3 July and then leave on a long journey that will bring all the best of his music and Italian sound to the most evocative beaches of the Belpaese.

Jova Beach Party 2022, it starts from Lignano Sabbiadoro. Jovanotti: “Come and have fun”

The rich list of artists who will accompany Jovanotti in his Jova Beach Party 2022 throughout Italy, could only start with a very strong triad of Italian DJs and producers. Among the 150 guests of Lorenzo Cherubini also Benny Benassi, Dardust And Takagi and Ketra

On the stage of his Jova Beach Party, Jovanotti will also give space to the emerging faces of Italian music. It will be Ariesbut also i bnkr44

Since at the Jova Beach Party the imperative will be to dance and sing under the summer sun and in front of the sea, among the guests of the various scheduled dates, the beloved Salento band of Boomdabash

In the 21 musical events scheduled with Jovanotti, there will also be a look at indie-pop music. Also among the highly anticipated guests of Jova Beach Party 2022 Coez ei Coma_Things

Dani Faiv he is among the most popular Italian rappers of the so-called Generation Z. He will also be on stage with Jovanotti on some dates of his Jova Beach Party. Ditto for the star of the last Sanremo Tananai who, we are sure, will create a show with Jovanotti to dance to

VIDEO Jovanotti, his most famous songs

Alongside pop and rap, which promise to unleash all the spectators of the various appointments with the Jova Beach Party 2022, it is also time for elegant and refined music, between the poetry of the songwriter of Diodato and the mix of genres brought to the stage by Davide Shortyemerging protagonist of Italian soul, R&B and funk

As told at the beginning, Jovanotti has chosen to host numerous artists from the Italian music scene on his stage for a big party together facing the sea. And so, in the 150 artists of Jova Beach Party 2022 the disk jockey Dj Ralf and the duo Merk & Kremont by Federico Mercuri and Giordano Cremona

He is the one who has been able to combine the voices of Gianni Morandi and Jovanotti in a perfect medley and duet during the last Sanremo Festival, allowing the duo of Italian music aces to win the cover evening. The German DJ and producer Mousse T is among the guests of Jova Beach Party 2022

It is not the first time that the magical duo formed by Jovanotti and Enzo Avitabile gets together to make music together. The Italian saxophonist will follow the singer of I love you baby on some dates of his magical summer tour on Italian beaches

On the stage of the Jova Beach Party 2022 there will also be time for unprecedented collaborations. An example of this is the presence among the guests of the Extra smoothbut also gods Fast Animals And Slow Kids

I cross everything rap the one with Frankie HI-NRG MC. The two artists will give life to a fantastic show during the 21 stages of the Jova Beach Party 2022

Also Veronica Lucchesi and Dario Mangiaracina de The List Representative, will be on the stage of the Jova Beach Party 2022, starting with the zero date tomorrow, Saturday 2 July from Lignano Sabbiadoro. But that is not all! Ready to dance under the stage even with the music of Shade And Rocco Hunt

Lorenzo Cherubini chooses among the guests of his rich summer tour on the Italian beaches also some of the most talented Italian songwriters of the last decade. I am an example of this Motta And Willie Peyoteboth highly anticipated on some dates of the Jova Beach Party 2022

A great party capable of uniting all the beauty of many different generations. This is the soul of Jova Beach Party 2022, because there is only one music and it is for everyone. Here then on the stage of Jovanotti’s highly anticipated tour you will meet iconic artists of Generation Z such as Sangiovanni and Luchè, but also singers loved by the public of the 90s and 2000s such as Sottotono

At Jova Beach Party 2022 also the unique opportunity to meet all the elegance of Mara Sattei and the energy between pop and rap by Rkomi. Both will sing alongside Jovanotti on some dates of his magical show

And obviously, among the leading artists of Jova Beach Party 2022 the one who is the host could not be missing. We are talking about Jovanotti who from tomorrow, Saturday 2 July, with the start of Lignano Sabbiadoro, will bring back all the beauty of live music and the thrill of being together singing and dancing, even on the wonderful beaches of our Peninsula.

Jovanotti, all the songs of a Mediterranean that is a blessing