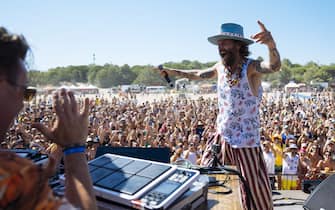 “A gigantic job, a madness”, these are the words of Jovanotti after the debut of his Jova Beach Party. “When we went on stage a few days ago, it was as if we had never moved and I like the idea of ​​people coming back to one place”, on the contrary, he adds: “Doing something completely innovative sounded strange to me.”

Two guests of this first stage in Lignano Sabbiadoro, the first was Max Pezzali, whom Jovanotti remembers from pre 883 times.

Jova Beach Party 2022, it starts from Lignano Sabbiadoro. Jovanotti: “Come and have fun”

These are Jova’s words about his friend and guest Max: “Cecchetto brought me the cassette of these I Pop, as they were called before, and I liked it a lot. So much so that when I got the cassette of ‘They killed the ‘spiderman’ I thought I preferred them before. ” But Cecchetto – Jovanotti recalls – told me: you’ll see that I will sell a million copies with them “.

The other guest of the first Jova Beach Party is Gianni Morandi, together the two, recently united by an artistic partnership that has seen them involved as author (Jovanotti) and interpreter (Morandi), they sang as if there was no tomorrow .

Sung, in addition to classics from Morandi’s repertoire, the two songs put on the market so far: “L’allegria” and “Open all the doors”, with the latter Gianni Morandi ranked third at the last edition of the Italian Song Festival of Sanremo, to which Jovanotti instead participated as a guest.

Jova Beach Party, what you need to know about the Jovanotti concert in Lignano Sabbiadoro

During the last rehearsals Jovanotti has revealed that there will be a third single written by him for Gianni Morandi, out next July 15th.

Jova Beach Party, 150 guests on stage in the different stages

“I wrote it for myself – says Jovanotti – then I thought: with Gianni this flies”. The title of this new song is “Ola” and, Jovanotti guarantees “You will see a Gianni Morandi like you haven’t seen him for a long time”.

Watch out for those two …

Some of the moments shared during the first leg of the Jova Beach Party 2022, in the photo Lorenzo and Max Pezzali

With Gianni Morandi we laugh and joke, as well as singing on stage

The public that crowded the beach of Lignano Sabbiadoro for this first stage of the Jova Beach Party found themselves in front of a stage transformed into, as Cherubini himself explains, “A sailing ship that has crossed seas and storms”

“Being here is incredible”, and not only for Jovanotti, but for the public who participated in what is more than a party, a unique format in the world, an unprecedented idea, an overwhelming experience for all the artists and for all the public.

Lorenzo’s sailing ship and total embrace with his people, began his journey and will be in 9 popular Italian beaches, 1 mountain meadow, 1 racecourse and 1 airport. JOVA’s Woodstock is a big party, a real temporary city, a fun village animated by the desire to dance, to be together, to hug.

The most innovative happening of the summer began when the doors opened around 2:00 pm and ended after a great marathon of music and dance full of fun.

“The idea is simple: PARTY” – declared Lorenzo – “Celebrating by dancing and singing while gathering by the sea, is something that human beings have always done. In 1982 (July 4, 2022 will be exactly 40 years) I had my first night as a DJ in a nightclub in Cortona and I had the precise and indefinable feeling that this was my place ”

… and continues: “I admit, it is a blow to the ass to find a dazzling passion at the age of 15. In these 40 years the console has always remained the basic platform for everything that has happened to me in the world of music and entertainment ”

“In 2019, after some experiments in improvised situations, JOVA BEACH PARTY was born which is my idea of ​​a total party, where live music, the console, nature, technology, the meeting of worlds, pop culture, artists, good food etc. etc. are the elements of something new, unique in the world and as old as the world: THE PARTY. ”

JOVA BEACH is Jovanotti’s dream come true. Every day a different line up of guests, a different set of Lorenzo. No lineup.

A magical moment of pure romanticism during the debut of the Jova Beach Party 2022 in Lignano Sabbiadoro. Lorenzo in front of the microphones of Sky Tg24, told the story of the two spouses born one day apart in the same room

Watch the VIDEO: “Jova and the spouses: a story between two cradle mates”