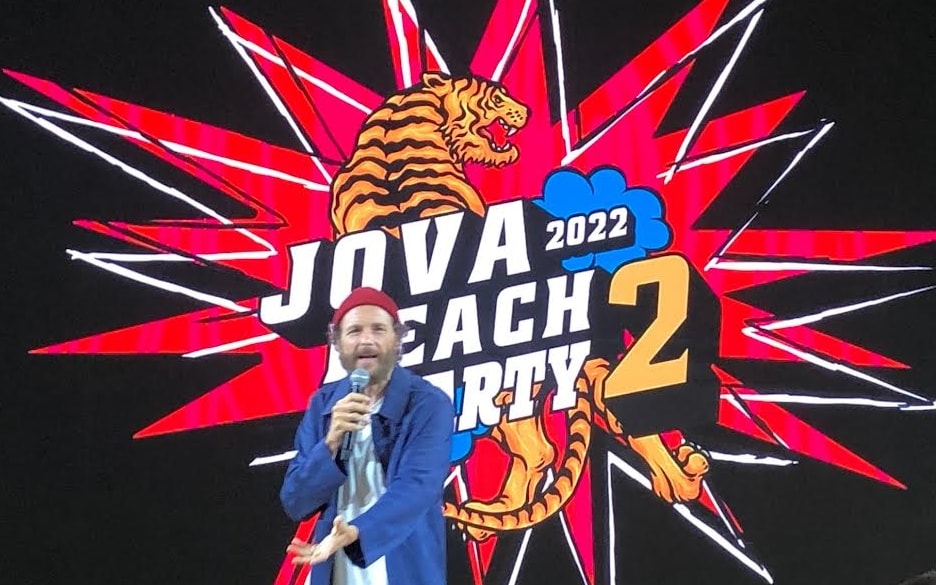 One word one world: rePARTYamo. Jovanotti returns to the beach in 2022 and announces it along with the new single The boom. For two years Lorenzo leafed through these photographs and it really happened and it could happen again. There are experiences that mark forever and are driven by warmth and color. And the images on the videowall leave black and white and become color. The music also lights up and Lorenzo appears with a sentence from the motivation that awarded the Nobel Prize Giorgio Parisi: “For the discovery of the interaction between disorder and fluctuations in physical systems, from atomic scales to planetary scales”. Between recurrences, eclipses and cosmic rebirths you enter the world of Jova Beach Party 2022 that “is the thing that I feel most mine in all these years. It is not a format, it is a flan because it does not have a shape. Gustave Flaubert said that Madam Bovary was he and the Jova Beach Party is me. When I got off the Linate stage on 21 September 2019, the strong feeling was that I wasn’t at the end of something but at the beginning, I wanted it to continue. Then we stopped but constant feedback came. It was a game, a ritual, a village, it has become a tradition that has entered the skin and at the second edition we are already at the anniversary. And I love rituals. We think that literature began on a beach 3 thousand years ago, the beach is the frontier of life that developed in the water and then invaded the earth. It cannot be done except with the capacity of 100 and without masks because this is a gathering, this is the representation of what I love most “.

The poetic manifesto of Futurism is a point of reference for Lorenzo: “Only the perspective has changed, we can judge the past but not the future which continues to have promises. The journey is like existing on this planet without being a threat to the environment. The future must not be resentment or guilt but an enthusiasm to be made to flourish. So sacrifices also become enjoyable if you have a goal. In the last 70 years there has been damage to the environment, some are not reversible but others are. And I want to create a climate where inside we can talk about… climate in an effective way. I will do it by inviting exponents of culture, sport, activism, evolutionism, science and each one bears a testimony to 50 thousand people on the beach in swimsuits. And I am convinced that it is more effective than doing it in a sports hall “. It is the time of the WWF with the president Donatella Bianchi who signals how much the problems are moved forward and “therefore our strength to change must take over”. The mission is to raise 5 million to reclaim 20 million square meters of beaches, lakes, rivers and seabeds and the driving force will be Intesa Sanpaolo. Those who contribute will be able to participate in two exclusive concerts in Rome and Milan in October 2022: 4 thousand people will be drawn.

These two thousand years have been an infinite time and therefore the journey restarts from the logo that recalls that of 2019. Having done that, you had to think about the place and reading and re-reading Camus “I was thrilled by what he said about the Mediterranean and Italy is the center. The Mediterranean is music, culture, politics. I wanted the Jova Beach Party to look like a sailing ship that went by in a storm and came out battered and even more alive. Discarded things will be used, abandoned in factories, which is more expensive than making new things but I want lived things. And we take them to 12 places “. On the other hand, speaking of economy, it is estimated that in 2019 each participant on a given date spent about 200 euros. Then the wedding project that was loved so much in 2019 expands and becomes the beautiful stories in the sense that, thanks to Radio Italia, it will filter requests and those choices will receive a special welcome from Lorenzo. Obviously there will be guests: “It’s a highly sought-after project in music, I already have names with yes on my mobile phone but I don’t announce them. We will have three stages, the main stage with my evening concert, then the Kontiki stage in the middle of the beach and finally the Sbam! Stage which had a great success and which from today will be joined by a record label, Sbam! Records “. The app is ready, podcasts arrive in January “which are beautiful when they are long”. And the record? We just listened to the new single Il Boom but Lorenzo has been writing for months “there are 30 songs one after the other that I myself was afraid of so much naivety. I was thinking about post-war music when swing was born to recover the most beautiful meaning But it was not an album, for me it was a different scenario, it was the disc of the sun and maybe we will get there at the winter solstice. The songs will be released in series, linked to the seasons, and only in digital.