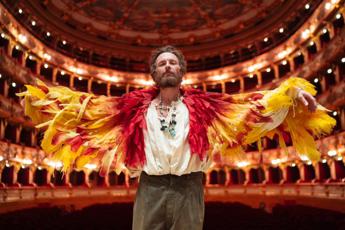 A few days before Christmas, Jovanotti releases five new singles which are a new episode of his ‘Disco del Sole’. In the era of liquid music, that is usable without traditional phonographic support (cd, vinyl, tape), the concept of album is indeed outdated. And there is more and more space for a production punctuated by singles: ‘serialized’ albums. So Lorenzo, kicks off his ‘flow’ of new music, anticipated by ‘Il Boom’, with five songs very different from each other but united by that “desire for life, air, light, rhythm, joy, heart pounding, adventure” that have always distinguished him and that the artist caressed even more during the pandemic.

“I decided not to go out immediately with an album – explains Jovanotti – although we worked on more than twenty songs, first alone, then with some of my fellow musicians, then two months with Rick Rubin, in a forest between the Apennines and the sea, inside a school abandoned in the 1950s when the countryside was depopulated and agriculture was mechanized. As naughty schoolchildren together with Rick ‘fire eaters’ Rubin we opened all this stuff that over the months I had accumulated in a completely instinctive way, without thinking about anything, completely disconnected from everything that was not a huge feeling of Love and desire for life, air, light, rhythm, joy, heart pounding, adventure. “

Five songs that, he adds, “are heart and instinct and come after Il Boom, with its overwhelming, electric, colorful, exciting imagery, to be danced to exaggerated volume. A futurist piece, a box for disassembling everything that has the shape of a song ‘that exploded into 26 deadly remixes, one stronger than the other. The five songs were finalized last week in Milan with Pino Pinaxa Pischetola and are now available everywhere.“, he adds.

After Il Boom here comes ‘La Primavera’ in advance on the calendar: a song that is a sort of title-track of this quintet of songs (the other four are ‘I love you baby’, ‘A love like ours’, ‘Between me and you’ and ‘Border jam’). ‘La Primavera’ is a single that draws on 80s synth pop and a lean rhythmic blend, sequencer, distortion and a hint of French touch in the sweet, stubborn and recurring bass. An invitation to take in the right energies, positive experiences, ready to keep alive the musical aura of each of us. “‘La Primavera’ – says Jovanotti – comes out when winter begins, as a statement, a declaration of intent. It is a piece born from an instrumental demo I received from Noochie Rigano and Riccardo Onori, my collaborators for many years. I had those two verses written on a cellphone. I also remember the day I wrote them, but I don’t remember why, in fact I remember it but I won’t say it. I sang them on the base and then the refrain was born as a wild flower is born. In June 2021 I rekindled my studio after so many months in which I had only worked with makeshift means (guitar, mobile phone, iPad, notebooks and post it) and ‘La Primavera’ was born, but it looked a little too much like summer ( on) so I put her on the bench for a while. When Rick asked me to listen to all the auditions I had (about 40) I put it in a queue, and when he heard it he asked me what I was talking about. Of spring I said, the season when nature blooms again, but not a domesticated nature. This spring is wild, it has a tension inside, a supernatural strength, something that remains a mystery to me. So he replied ‘let’s go into it’, and inside that chaos of a thousand tracks that we had put in the demo he did the magic and asked me to sing it differently, without pushing. I thought of Franco, Pinaxa was there with me and I said ‘I’ll try to sing it thinking I’m with Battiato. Teach me, let’s pay him a veiled homage, a flower for him ‘”. And in the attack of the piece the homage jumps to the ears.

Of ‘I love you baby‘, Lorenzo says: “I admit, I’m crazy about this piece. I know it is not elegant to say it but it is so, if someone else had done it I would do it to him, luckily I did it. It’s a love song, it’s for a girl who has to climb a mountain, swim across the ocean, kiss a toad in the mouth with no guarantee that she will turn into a prince. Some things cannot be said emphatically, you have to say them dancing, waving your arms, turning up the volume, singing to the limit of pitch, one step before the voice becomes a scream “.

Then there is the ballad all feeling ‘A love like ours‘, a song sung in purity. “We were in Milan, July 2020, my girls and I. In the morning every now and then I would pick up the guitar and sing songs that we like. From the Bluetooth speaker came a playlist of Green Day that my girls love, and so do I. Then came ‘Something stupid’ by the two Sinatras. Teresa said to me ‘Santa you should write a song like this’ and I thought ‘well …’ Then I took my guitar and wrote one that imitated her a bit, but almost playing the words they came out together the melody and I liked them, they were true, they had strength. I pinned it in my cellphone voice memos and waited for autumn and then winter and for new year’s eve 2021 I recorded it with garage band on my laptop. On New Year’s Eve the three of us were alone in the house, and after the toast I played it, and the girls liked it. Happy New Year, full speed ahead. “

Delicate, with few chords and a lot of pathos, it is’Between me and you‘, where Lorenzo vocally gets naked. “It is a ballad, a love song, a dedication that was not requested of me, in fact she is not in the room with me while I sing it, but she is with me in the sense that she occupies my every cell. ‘Between me and you’ is a mini-song, small on the verge of nonexistence, and perhaps this is not the right time for songs like this, uncertain, limping, but I don’t give a damn, I like it. Rick suggested that I avoid making it with the acoustic guitar, to take it to a less traditional part, so I asked Davide Rossi if he would make me a solo cello line. Give me an indication, he said, and I ‘at Bach’ and there the sky thundered and all the alarms went on “, laughs Lorenzo.

Finally comes’Border Jam‘, which wants to be a collective party where the boundary jam of the title is found in the musical influences. “Everyone has opinions and many are keen to affirm them, radicalize them, defend them, expose them, shout them, make them an identity, and that’s fine by me, God forbid. My problem is that I don’t have many opinions, I rather have feelings. If I ask my opinions, my inner parliament is divided on almost everything. Not all, but almost. If, on the other hand, I ask about my dreams, I have no doubts: I dream of a world without borders. Point. This song is about a dream, or rather a dance of a dream, it is a party for dreamers, it is not a political manifesto, it is a jam, which means jam. Inside there is the carnival, Africa, the Clash, California, the Jova Beach Party, New Orleans, the Balkans, the Mediterranean… I don’t know what’s inside, it’s a jam, a jam. But the jam is good, I like it ”, underlines Jova slyly.

The five songs are accompanied by the video of ‘La Primavera’, a psychedelic film short, a dream video, unique for Lorenzo’s story. In the video the colors explode but a strong inner story is also outlined. To underline that spring is a season, but also a feeling. And it is so beautiful, carefree, cheerful and joyful perhaps also because winter comes first. Shot on film by Tommaso Ottomano, the video clip was set in the spaces of the Teatro Grande in Brescia. In the video Lorenzo is accompanied by his cronies Saturnino, Riccardo Onori and Kalifa Konè.

“I noticed Tommaso Ottomano – says Jovanotti – for a video by Lucio Corsi who is a songwriter I follow and that I like very much. We chatted for a while and the idea of ​​the video was born from our crossed imaginations and from the most disparate mutual references. Some precise stylistic references: the images of Terry Gilliam, the splendid 81-year-old among the greatest directors of all time and his absurd adventure of Baron of Münchhausen. There art commedy, a true timeless radiography of Italy. Giants like Dante Ferretti and Francesca lo Schiavo, the great Italian costumes, the Rococo, the travels in time, the videos of the early 90s before this format was transformed into an occasion for product placement and little more. Tommaso is very good and has an expressive force that is not aligned with the aesthetics of the moment, he doesn’t care about trends and aims for effect, we had a great time working together, he is meticulous and poetic. My lifelong friend Umberto Angelini directs the great theater of Brescia and for a long time we had promised ourselves to do something in that wonderful place and today the opportunity has arrived, it is a place of absurd beauty. I wanted spring to have a funny and somewhat magical video, with mixed emotions inside, as is the song, spring is flowering., and the flowering does not govern it, you stay in it, you participate. In the video we fight, dance, play, run away and chase, give birth, jump on the bed, go through the 4 seasons like a theatrical company in search of its ever-changing scene. The costumes I wear are the result of research in the great theatrical costumes, one of the looks is an original from a 1929 Rigoletto. The golden armor reflects the sunlight, and multiplies the worlds I step inside like a mirror, and both me and the child who is born and immediately grows up have the tip of the golden nose, small details to discover among the many that are in the video ”, he concludes.