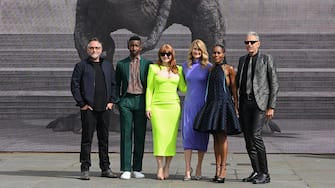 Jurassic Park – The Dominion takes place four years after the destruction of Isla Nublar. Dinosaurs now live and hunt alongside humans around the world. This fragile balance will reshape the future and determine, once and for all, whether humans remain the dominant predators on a planet they now share with history’s most fearsome creatures. The film pushes the more than $ 5 billion franchise into bold and uncharted territory, featuring never-before-seen dinosaurs, dizzying action and stunning new visuals.

Jurassic World – The Dominion, the review of the film

Jurassic Park, the cast of the first film. PHOTO

Throughout the trilogy of Jurassic World, dinosaur behavior expert Owen Grady has undergone a remarkable evolution. “In Jurassic World, Owen is a bit of a rebel, “says Chris Pratt.” He was at the very height of his heroism and kept love at a safe distance. Neither The destroyed kingdom we begin to see him take on a few more responsibilities. And now, in Domain, Owen has obligations: he is a father and a husband. He can’t just do the crazy things he was used to, because now more people depend on him

Jurassic World – The Dominion, from cast to plot: what we know about the film

Similar to her partner Owen, Claire Dearing also continued to morph and change throughout the trilogy of Jurassic World. “Claire is an interesting, nuanced and atypical heroine,” says Bryce Dallas Howard. “In each film you go through a specific journey. Now in Domain, Claire is in line with her values ​​and knows what is important to her life. She knows how to make a difference, but she has to deal with the guilt for the trauma that has been inflicted on others, and she feels a responsibility to resolve it. ”

Jurassic World – The Domination, Chris Pratt shows off all his stunt doubles on set

Almost thirty years after Dr. Ellie Sattler’s first public presentation in Jurassic Park, Laura Dern returns in the role of the iconic paleobotany. “Colin had mentioned my character’s return to me and Steven Spielberg called me more formally to ask what I thought of the idea of ​​Ellie Sattler returning to the franchise with a couple of friends,” says Dern. “And I was really excited about it. I think we all wanted her to come back with a new awareness, and for her to progress in life and work

After appearing as Dr. Ian Malcolm with a small part in Jurassic World: The Destroyed KingdomJeff Goldblum returns as the beloved mathematician, this time reuniting with his co-stars of Jurassic World Laura Dern and Sam Neill. “It turns out that Ian, Ellie and Alan have some unfinished business – personal and environmental,” says Goldblum. “Their shared destiny and legacy are yet to be realized. They experienced something like a troika that only they can fully and uniquely appreciate. ”

Jurassic World – The Dominion, a new featurette from the film

Sam Neill returns to the cast as paleontologist Dr. Alan Grant. “For some time now there has been talk of a new film by Jurassic”Says Neill. “But my interest was not limited to a simple cameo. I wanted to do Alan Grant justice in the event of a return of him, and it soon became apparent that Alan’s presence was crucial to the plot. The idea got me involved, and I was really happy with the invitation to join the project by Domain

Jurassic World: The Dominion, the new exclusive photos of the film

In Jurassic World – The Dominion, Kayla Watts is a former military pilot who is now a skilled freighter pilot capable of flying anything, no questions asked. The character is played by DeWanda Wise of She’s Gotta Have It by Spike Lee. “Kayla Watts is a new character that Emily and I created together, with the help of DeWanda,” says Colin Trevorrow. “I acknowledge both of them for having defined who this woman is and how she changes throughout history. She is a pure adventurer, but she is also a woman who has to deal with her past ”

In Jurassic World – the Dominion. Ramsay Cole, played by Mamoudou Athie of Archive 81 – Alternative universes of Netflix, he is the highly educated employee of the powerful biotech firm Biosyn. Although Ramsay’s official title is in charge of communications, the scope of his work is broader. “He soon discovers that that title covers a wide range of responsibilities, because he plays the role of Lewis Dodgson’s right-hand man at the same time,” says Athie.

Jurassic World – The Dominion: new trailer for the grand finale of the saga

Jurassic World: The Dominion, the map with dinosaur sightings in North America

Barry Sembenè, played by Omar Sy, made himself known to the general public in Jurassic World, where he trained dinosaurs with Owen Grady. This character, according to Trevorrow, not only worked with dinosaurs, but behaved almost as if he raised them as pets. “I had lunch with Colin and he was working on the franchise Jurassic World“, Sy says.” He proposed me a part, which I accepted with enthusiasm ”

Isabella Sermon plays Maisie Lockwood, the now pre-teen girl who lives with Owen and Claire. Sermon made its debut in ne The destroyed kingdom, in which it is learned that Maisie is a genetic clone of Sir Benjamin Lockwood’s daughter. Now that Maisie’s identity has been revealed, Owen and Claire feel the need to keep her under wraps to protect her. “She is not allowed to have much contact with the outside world because Owen and Claire fear someone will take her away for use in science experiments,” says Sermon.

Lewis Dodgson is the CEO of Biosyn, and is played by Campbell Scott of The Amazing Spider-Man 2 – The Power of Electro. In the Jurassic Park in 1993 conspired with Dennis Nedry to smuggle dinosaur embryos out of the park, in a can of Barbasol shaving cream. “Dodgson had a greater presence in the books than in Jurassic Park“says Scott.” And even though his story in the books is different from that of DomainI wanted to bring to the screen some elements that Crichton attributed to the character ”

Soyona Santos is a mysterious woman, the link between Biosyn and the dinosaur black market, although her intentions are unknown. The character is played by Dichen Lachman, who recently appeared in Severence . “Colin described Soyona to me as a tough girl, among the best of him in his business,” Lachman says. “And he added that he doesn’t need to get his hands dirty because he has other people doing it for her.”

The Italian poster of Jurassic World – The Dominion. In cinemas from 2 June, the film is the final chapter of a highly successful saga that began in 1993 with Jurassic Park in 1993. In Italy, on the first day of programming in the cinemas, it exceeded a million dollars in receipts