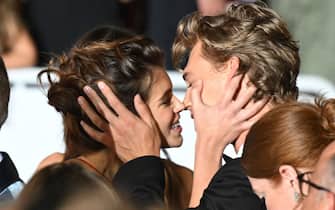 Kaia Gerber and Austin Butler drove photographers crazy at the 2022 Cannes Film Festival where the world premiere of Elvis, the biopic about the King of Rock by Baz Luhrmann. The model and the actor, together since last winter, always keep a low profile in public but the fans were waiting for a kiss on the red carpet which, in fact, has arrived.

Hidden in the crowd of waiting for the premiere, the model and the actor smile at each other on this special evening. Elvis is undoubtedly one of the most significant appointments in the calendar of the Cannes Film Festival 2022 together with Top Gun: Maverick

WATCH THE VIDEO: Who is Austin Butler

Kaia Gerber and Austin Butler are one of the couples of the moment. Their love story is one that makes fans dream: young, talented and successful, they live their love in a confidential way and have appeared very few times together in public.

The first official photos of Gerber and Butler posing in front of the photographers are from the last Met Gala which was held in New York on May 2nd. Both stole the show by sporting high fashion looks that were impressive

The news of a date between the 20-year-old model and the 30-year-old actor hit the media last winter. The two were spotted together in Los Angeles in December 2021 and many were already betting on the existence of a new couple.

Elvis, unveiled the soundtrack of the film: there are Eminem, Maneskin and Doja Cat

Kaia Gerber hit the red carpet alone. She and the actor have chosen not to pose together. For the event, the model showed off a very simple and very refined look, a Celine long dress made to measure for her by the designer Hedi Slimane

Virtually devoid of flashy accessories, the Gerber captivated audiences with its extraordinary beauty and simplicity. The model is styled by Danielle Golodberg

Butler also chose Celine for the preview of Elvis. The di lei is a suit with a black double-breasted jacket with satin lapels embellished with a small one boutonnière. Cartier jewelry and watch completed the look

Butler is considered one of the rising stars of Hollywood Olympus. His Elvis it will certainly take him far