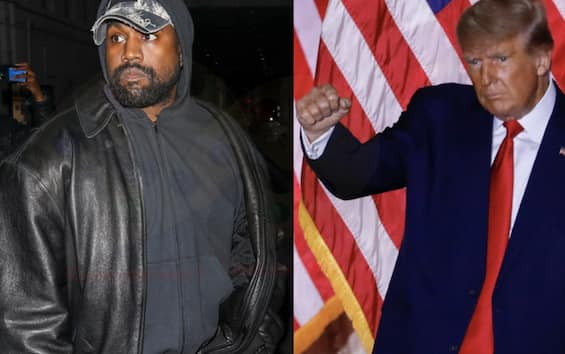 Kanye West dreams of the Oval Office of the White House and, after having confirmed in the last week his candidacy for the 2024 United States presidential elections (curated in the electoral campaign by the controversial far-right journalist Milo Yiannopoulos), on 24 November he met the ex-President Donald Trump, who last week announced his third Republican candidacy to lead the nation, at his residence in Mar-a-Lago, Florida. The rapper, spotted at the Miami airport in the company of Nick Fuentesfar-right political commentator and supporter of white supremacist ideology, confirmed the visit in a tweet: “First time in Mar-a-Lago”, where the artist better known as Ye he “made President Trump wait” before asking him “to be my running mate in 2024”. In a presidential campaign videos shared on the social network on November 25, Ye then described i details of the “Mar-a-Lago report”.

THE LAUNCH VIDEO OF THE 2024 PRESIDENTIAL CAMPAIGN

Ye surprised and upset Trump with the request to become its vice-president (“I think it was at the bottom of the list of things that caught him off guard”) and for “dealing with intelligence” the meeting. The rapper later called Fuentes a “loyal” of Trump and he suggested to the ex-President to “go and get these people that the media have tried to erase and from which they have suggested you get away”. Among his”loyalists” Ye also numbered Trump supporters who stormed the Capitol on January 6, 2021seat of the United States Congress, to contest the result of the 2020 presidential election with the victory of Joe Biden. “Why, when you had the chance, didn’t you release the January 6 rioters?” said the rapper, who then cited his ex-wife’s efforts Kim Kardashian to free Alice Johnson, who was sentenced to life in prison for her involvement in cocaine trafficking but pardoned by Trump in 2018. “He didn’t get her out of jail…for Kim, he did it for me,” Ye argued. on theconservative Christian electorate, the rapper then asserted that “they will ask to tie all policies directly to the Bible”. The 32.2 million followers finally learned that “Trump basically started yelling at me…telling me I was going to lose”but in vain: “What will I lose? Come on, you’re talking to Ye”.

THE OTHER VIDEOS #YE24

Ye accompanied the video with the hashtag #YE24, which also accompanies three additional presidential campaign videos posted in the last few hours. In the first, a journalist reports the news of the breach of commercial agreements with Adidas following the online diffusion of anti-Semitic comments by the rapper, moreover temporarily suspended from Instagram and Twitter. “Adidas has just froze all of Ye’s bank accounts and is suing him for $275 million in advertising costs,” is heard in the footage, interspersed with images of the rapper sitting head down in the center of a white room. In the second video the anchorman of Fox News Tucker Carlson remember West’s decision to wear the “White Lives Matter” t-shirt at Paris Fashion Week last October, while the rapper Diddy sympathizes with Ye: “Look, I forgive him for the things he said.” Finally, the last video contains a glittering logo in the shape of a circle with the inscription “YE24”.

RELATIONS BETWEEN YE AND TRUMP

The paths of Trump and West first crossed in 2015, when the rapper announced his candidacy for the 2020 presidential election. In 2016, before meeting Trump in New York, Ye declared that “if she had voted, she would have voted for Trump”. In 2018, during an appearance at the Saturday Night Livethe rapper wore a hat with the words “Make America Great Again”, Trump’s slogan, who then judged the appearance “great”. In 2024, despite getting just 60,000 votes in previous presidential elections, Ye intends to run for the highest political office in the country. On the other hand, Trump also does not give up, and having promised after the Midterm elections to “make America great and glorious again”, because “the world has not yet seen the true glory of what this nation can be. We haven’t reached that peak, believe it or not.”