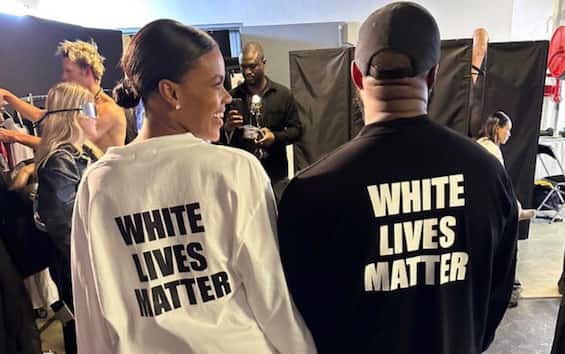 Adidas announced that it has blocked its partnership with Kanye West, stopping the deal it had with the sneakers line of the rapper’s fashion brand, Yeezy.

The decision comes a few days after the T-shirt affair: the singer decided to wear a T-shirt with the words “White Lives Matter”, shown at the Paris fashion week on the occasion of his brand’s show. The phrase takes up, upside down, the slogan “Black Lives Matter”, a phrase that opposes racism and police brutality. The slogan was born within the protests following the killing of George Floyd in the summer of 2020.

In the press release with which the sportswear company makes it known that it has blocked the agreement with the rapper, the episode of the writing “White Lives Matter” (which means “the lives of whites are worth”, like “Black Lives Matter ”stands for“ black lives are worth ”).
However, the aforementioned press release underlines that “partnerships that work are linked to mutual respect and shared values”, therefore with clear reference to what happened a few days ago during Paris Fashion Week.

After learning of Adidas’ decision to block the partnership, Kanye West responded with an Instagram post – later deleted – accusing the sportswear company of “stealing” its designs. And he underlined in capital letters: “I am Adidas”.
Also on IG West he wanted to share a message exchange he had with his father, noting the following: “For the first time in 45 years I have made my super educated – and former Black Panther – parent proud.” This is probably to try to pass a concept like: “Even a former Black Panther is on my side”?

The rapper started a storm after wearing the T-shirt that reads “White Lives Matter”, a clear and provocative reinterpretation of the slogan “Black lives matter”. After countless protests arose, West remarked on his thoughts, writing in an Instagram story: «Everyone knows that Black Lives Matter was a scam. Now it’s over, please. ‘

The unhappily mangled t-shirt was worn by West during the presentation of his new fashion brand. In addition to him, influencer and activist Candace Owens (who was alongside the rapper-entrepreneur) also wore it.

Kanye West is no stranger to such miserable outings. Recall that in March 2022 he was banned from Instagram due to racist insults against actor Trevor Noah.
This time a chorus has risen on social networks that practically unanimously criticize West’s gesture. “Disgusting, dangerous and irresponsible,” writes a user on Twitter posting the photo of the shirts in question (one on a black background and with white writing and the other, vice versa, with white background and black writing). “The fact that they use racism – which also backfires against them – just to get attention is pitiful and embarrassing,” is another person’s comment.

Not only on social networks have been heard voices of protest: in New York on October 4, an African American woman walked in Times Square wearing only a pair of panties and with the following words written in white on her bare back: “White Lives Don ‘t Matter “(ie: white lives don’t matter).