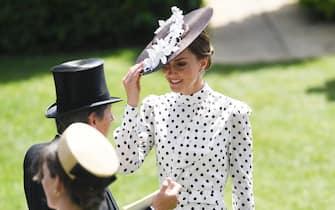 A visit, the overseas one, which according to some tabloids could somehow reopen the public competition with Meghan Markle and Harrywho left London for California

Kate Middleton and Prince William contested in Belfast: “Ireland belongs to the Irish”

William and Kate will mark their first visit to the United States in eight years: it is, in fact, the first in the US since 2014and first ever as Prince and Princess of Wales, a title he received following Queen Elizabeth’s death in September.
In a ceremony on Dec. 2, the royal couple will join “activists, innovators, policy makers and artists to celebrate the cohort of fifteen finalists global 2022 before the five winners are rewarded“

“The Prince and Princess are looking forward to spending time at Boston and to learn more about the problems that are plaguing the local population, as well as to celebrate the incrediblethe climate solutions which will be highlighted through the Earthshot Prize,” the release explains

Prince William and Kate Middleton’s trip to the United States will be only three days: it will start on Wednesday November 30th and will end on December 2nd. On Wednesday November 30, the royals will go to the town hall, where they will meet the mayor Michelle Wu and the ambassador Caroline Kennedy. The next day William and Kate will visit the Greentown Labs, the largest ‘climatetech’ incubator in North America. Soon after they will stop at Rock Inc., an organization focused on young people aged between 16 and 24 who are victims or protagonists of urban violence

Instead, they will have separate engagements on Friday: Kate will visit the Child Development Center at Harvard University, while William will meet again with Ambassador Caroline Kennedy and tour the library and museum named after John F. Kennedy. Finally, on December 2nd the ceremony of the award at the ‘MGM Music Hall at Fenway’, where the five winners out of the 15 finalists will be announced

“Inspired by President John F. Kennedy’s ‘Moonshot’, theEarthshot Prize he is ambitious environmental award global organization that aims to discover, celebrate and scale the best solutions to help fix our planet”. Established in 2020 by the Royal Foundation of Prince William, in July of 2022 became one charity independent of which William himself is president

“Recognizing the significant challenges facing the coastal city of Boston due to climate change, the Prince and Princess will see firsthand the work local organizations are doing to mitigate the risk of sea level rise,” the statement reads. Prince William and Kate will spend time learning about innovative technologies at Greentown Labs and will also listen to those affected by the climate-related challenges in the Boston area during a visit to Roca, a non-profit organization

First awarded in 2021, the award evening was held at London’s Alexandra Palace. This year the ceremony will take place precisely in Boston on December 2nd

Four days later in New York instead the couple will take the stage Harry-Meghan to receive the Ripple of Hope award, established by Kerry Kennedy (one of Bob Kennedy’s daughters, therefore Caroline’s cousin) and awarded annually to public figures accredited with having engaged in the field of human rights (in the past it was bestowed, among others, on Barack Obama and Joe Biden)