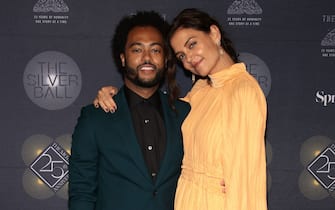 Katie Holmes and Bobby Wooten II are the most photographed guests at the annual Moth’s Silver Ball held this season in New York. The American actress and the musician, guests of the prestigious event, officially debuted as a couple a few weeks after the beginning of their relationship

Katie Holmes and Bob Wooten II were spotted together in the Big Apple about a month ago. They both appeared very relaxed and didn’t give the impression that they wanted to hide their bond in any way

Their first official release in New York confirms the desire to live the love story in a carefree way. At the Spring Studios in New York City, the actress and the musician let themselves be photographed together

The 25th anniversary gala of the Moth Ball brought many members of the arts world to New York for charity. Katie Holmes and Bob Wooten II intervened to award the musician and songwriter David Byrne here posing with them

Among the latest collaborations of Bob Wooten II stands out David Byrne’s American Utopia, a show that engaged the famous Talking Heads frontman on Broadway

Weddings 2022, the vip couples who will get married this year. PHOTO

Bobby Wooten III and Katie Holmes continue to pose with the illustrious guests of the event: with them David Byrne, the last on the right, and the director Darren Aronofsky, the first on the left

Katie Holmes, here’s how she changed

The evening continues with the award ceremony. Katie Holmes and Bob Wooten have a great time and look great at dinner with the other guests

Couples that broke out in 2022. PHOTO

For Katie Holmes and Bob Wooten II the next few months will be full of professional commitments. She is struggling with Rare Objects, a film that sees her engaged in the triple role of director, interpreter and screenwriter; he will go on tour with Carly Rae Jepsen