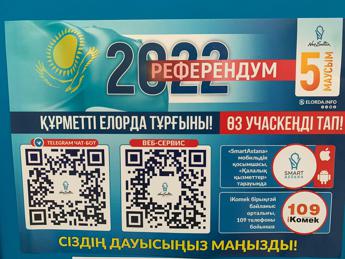 Granted the victory of the yes to the reform of the Constitution. “Dear compatriots, together we will build a new and just country”, said President Kassym-Jomart Tokayev

On the bridge that crosses the Ishim River, there is one of the few signs reminding the inhabitants of Nur Sultan that today is the day on which the historic constitutional referendum is held, the first since 1995 in Kazakhstan. “I voted yes because I think these amendments will bring Kazakhstan into the future,” said Bagila, 26, in front of a polling station in Akmol, 30 km west of Nur Sultan, while a singer cheers passersby with a pop song. , like all her compatriots, in recent days she received a text message urging her to vote.


The 10,012 polling stations set up throughout the country, the Electoral Commission informs, opened at 7 am (when it was 3 am in Italy) and will close at 8 pm. reform overturns the Constitution by modifying over a third of the articles, sending the ‘super presidential’ system into the attic to open the doors to the Second Republic. A panacea for the wounds opened by the January riots – according to the Kazakh leadership – which will mark the beginning of a process of democratization of the country. Today we also vote abroad. In Italy there are about 120 Kazakhs registered on the electoral roll who will be able to go to the polling station set up at the embassy in Rome.

On the eve, President Kassym-Jomart Tokayev appealed to the country. “Dear compatriots, together we will build a new and just Kazakhstan”, he declared surrounded by national flags where the eagle stands in the center. A bird symbol of pride and independence used by nomads of the steppes to hunt that we find in every corner of the capital. Also in the form of a golden statue at the entrance to the National Museum, one of the many ultra-modern buildings of Nur Sultan or Astana (which means ‘capital’ in Kazakh), as it was called until 2019 when it was renamed after the former president Nazarbayev.

According to some observers, the upcoming reform aims to leave behind the cumbersome political legacy of the First President or Elbasy (Leader of the Nation) as Nazarbayev was called, titles that will disappear from the new Constitution. The Kyrgyz journalist, Aslan Sydykov, who is well acquainted with the political events of Kazakhstan, argues that “Tokayev is formally giving up part of his powers to Parliament, but in doing so he acquires legitimacy in the eyes of the population and strengthens his power. The real nature of the state. it does not change. It remains an authoritarian regime “. Tokayev, for three years at the helm of a boundless country, very rich in gas, uranium and which literally floats on oil, as shown by the cost of petrol at around 0.40 cents per liter, is focusing on the construction sector to revive the economy post-Covid.

Throughout Nur Sultan there are construction sites and workers at work to build new residential buildings. Here the cold in winter is freezing and reaches 40 degrees below zero, but the inclement climate does not stop the development. From the top of Nur Alem, the futuristic museum of the Energy of the Future built on the occasion of the Expo that took place here in 2017, the capital appears as a neo-futurist city. The iconic Bayterek tower, dominated by a golden sphere, Norman Foster’s transparent Khan Shatyr curtain and the pyramid of the Palace of Peace and Reconciliation or the blue domes of the New Mosque (the name is still being studied), able to hosting up to 30 thousand faithful, define the skyline.

“Architects have become rich with us”, jokes the likeable but somewhat talkative Bulat Sarsenbayev, president of the Nazarbayev Center for Interreligious Dialogue. Nur Sultan, he says, was still a small village at the end of the 1990s. An ‘old city’ now survives along one of the banks of the Ishim and has around 1.2 million inhabitants. According to Aslan, Nazarbayev decided to move the capital here from Almaty, in the south, to counter the strong presence of ethnic Russians in the north. Already a few kilometers after leaving behind the projects of the archistars, traveling towards Lake Burabay, towards the border with Russia, we only meet petrol stations and herds of horses, as well as a few factories.

Meanwhile, the 18-year-old Nurdaulet comes forward to vote for the first time. “I chose yes because I want the country to develop”, he says confidently. And Tokayev is sure of victory too, who in reality has already won his most important challenge with Nazarbayev, reaching the top of the pyramid of power. “We have come out of 30 years of nepotism and we hope with Tokayev to put an end to all this”, underlines Aigul Kuspan, president of the Foreign Affairs Commission of the Kazakh Parliament, outside a polling station.

Under the president, the clans, which play a leading role in controlling the state apparatus including the economy, jostle for a place in the sun and being able to balance the balance of power between them is the key to the stability of the country. Village. And the greatest guarantee for Tokayev to remain in power for many years.

Italy, which is Kazakhstan’s second largest global customer and eighth supplier, with over 250 companies operating and more on the way, looks with interest at what is happening in the Central Asian giant. A new Italian Cultural Institute will soon open in Almaty, the country’s economic ‘capital’, while a biweekly direct Milan-Almaty flight will depart on 11 June. The referendum is the first step in a process of institutional reform and “it will not be the last, I believe, because the process, as always in these cases, is long and complex. But the course is drawn, and the impression is that it is irreversible “, says our ambassador, Marco Alberti.

The vote will contribute to further unblocking the country and will have “certainly positive” economic consequences both in the short and long term, enthusiastically says entrepreneur Marco Beretta, who has twenty years of knowledge of Kazakhstan and chairs the Italian Trade Association. Kazakh (Acik). Here development and favorable conditions for doing business are combined and in addition to being an “obligatory passage for logistics that goes from China to Europe, there is an almost unlimited availability of raw materials – he explains – Italians have the opportunity to seize a great opportunity, but they must “hurry because the world is redesigning itself and soon everything that is now simple could turn into a highly competitive environment”.