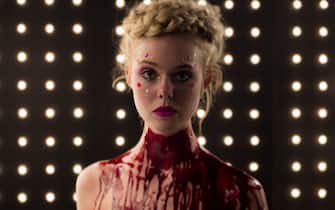 The Neon Demon by Nicolas Winding Refn. Film of 2016, is one of the most recent titles by the acclaimed Danish director. A powerful reflection on beauty and violence in the form of a horror dream.

Clockwork Orange by Stanley Kubrick. Among the best-known films of the acclaimed American master, this 1974 film had an unprecedented media and social impact, forever marking the debate on violence in modern culture.

Rollerball by Norman Jewison. A 1975 film, it has the merit of weaving a sporty plot into a sci-fi story with a well-kept aesthetic. Interesting to review today that the imagined dystopian future, the year 2018, is now over.

The Bad Batch by Ana Lily Amirpour. Dystopian and post-apocalyptic film presented at the Venice Film Festival in 2016, it obtained the Special Jury Prize in that event.

Doctor Strangelove by Stanley Kubrick. 1964 film whose full title is “Doctor Strangelove – Or: how I learned not to worry and to love the bomb” has the merit of having delivered to history the art of its director and his interpreter, the actor Peter Sellers.

The seven samurai by Akira Kurosawa. Considered universally among the milestones in the history of cinema, it combines historical drama and entertainment. It is considered the most significant work of the great Japanese master.

Amadeus by Miloš Forman. A historical drama from 1984, it is inspired by the life of composer Wolfgang Amadeus Mozart. It was a critical and public success and obtained numerous awards.

Rosencrantz and Guildenstern are dead by Tom Stoppard. Film of 1990 is a tragicomedy, transposition of the theatrical text of the same name by the same author of the sixties.

The House by Sam Raimi. Considered today one of the great horror classics, the first film of 1981 marked its era by becoming a firm inspiration for the films to follow.

Arizona Junior by Ethan and Joel Coen. With a script written by the filmmaking duo, this comedy starring Nicolas Cage and Holly Hunter is considered one of the best in film history.

The Big Lebowski by Ethan and Joel Coen. Filmed in 1998, it quickly became a cult title. From the very rich cast came iconic characters, above all the Dude (in the original, “The Dude”) played by Jeff Bridges.

Nikita by Luc Besson. Title of 1990 is an action film that well represents the anger and rebellion of a generation. The interpretation of Anne Parillaud, then wife of Besson and winner of the César Prize and David di Donatello for this film, should be framed.

Léon by Luc Besson. A 1994 film that owes much to the interpretation of its protagonists, the very young Natalie Porman and Jean Reno, was an international success for the French director who won this title of the César award.

Frankestein Junior by Mel Brooks. A cult title of its kind, it boasts generations of fans and great fame since its release in 1974. Made with a cast in a state of grace, it finds hilarious dialogue one of its strengths.

Half past twelve of fire by Mel Brooks. Among the most prominent films in the vast filmography of the Jewish director, it is an extraordinary parody of the western universe that does not fail to make irony on themes as crucial for each era as racism.

Monty Python and the Holy Grail by Terry Gilliam and Terry Jones. A cornerstone of humor on the big screen, it is an essential title for appreciating the art of the British comedy group.

The ice-eyed Texan by Clint Eastwood. Directed and starring Eastwood in 1976 (and today one of the most famous titles in his filmography) it was not supposed to be his film from the beginning: the project was initially in the hands of Philip Kaufman.

Interceptor – The Road Warrior (The Road Warrior: Mad Max 2) by George Miller. 1981 film starring Mel Gibson and second film in the “Mad Max” series, it is set in a dystopian future and is considered one of the best action films of all time as well as a fundamental step in understanding cyberpunk culture.