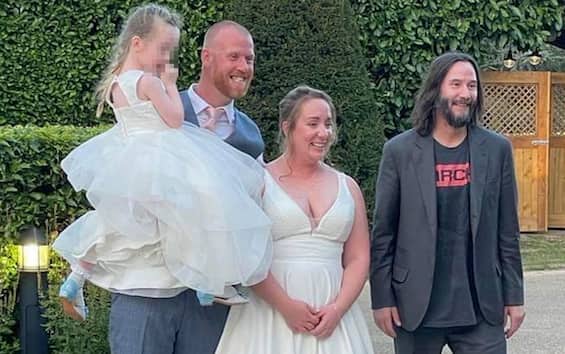 Keanu Reeves went to the wedding of a couple of his fans, to the delight of the newlyweds and everyone in the world, given that news like this is re-evaluating the bad reputation that Hollywood has always carried around. Are you capricious, mean, envious and temperamental? Usually it is, but then comes Keanu Reeves.

By now this actor has the reputation of the “Santa Claus of Hollywood”, in the sense that if in the showbiz there is a good person and ready to fulfill the wishes of all his fans, that is Keanu Reeves.
Everyone says about him that he is one of the kindest, most polite, good and empathetic people in Hollywood, something that in that Los Angeles-branded hell is seen as a beautiful and good rarity.

After the news a few weeks ago concerning his very patient indulging a boy who has harassed him with questions at the airport, in these hours the one who sees him willingly accepting the invitation from two future spouses arrives.

Good old Reeves went to their wedding, much to their delight and their guests. And also of his fans, who have one more proof to call him the least Hollywood star in the world.

At the bottom of this article you can see the tweet of the bride Nikki Roadnight, who has decided to share on social networks the magical moment with the scent of orange blossom mixed with the smell of Neo from the Matrix. Her wedding photos will be the only ones (or almost) that her guests and friends will really look at with the utmost involvement and morbid interest, without having to pretend …

The invitation to the wedding

The actor of Matrix he said yes to the invitation of James and Nikki Roadnight, an invitation to participate in their fateful yes. It is a couple of now newlyweds (but then future spouses) who last week celebrated their wedding at the Fawsley Hall hotel in Northamptonshire, England.
Keanu Reeves was staying in that hotel, which is why James Roadnight (the groom) invited him for a toast with him, his wife and guests. The actor agreed, promising that he would join them for the festivities. And so it was.

The words of the bride

“He was very friendly and said he would come,” said Nikki Roadnight, aka the bride, a Newsweek. “We didn’t know if he would do it or not, but it was nice that my husband was able to talk to him!”

Then the bride talked about the moment she saw him arrive with his inevitable jacket with the T-shirt underneath. Although the first woman of the wedding immediately became Keanu Reeves, who stole the show from the bride, Nikki was thrilled. He added: “He was so kind and friendly and congratulated us on our wedding. He was really helpful, he gave some photos to our photographer and then even time to talk to some of our guests and he also did some photos with them “.

Below you can see the tweet with which Nikki Roadnight shared on social networks the magical moment with the scent of orange blossom mixed with that of Keanu Reeves.