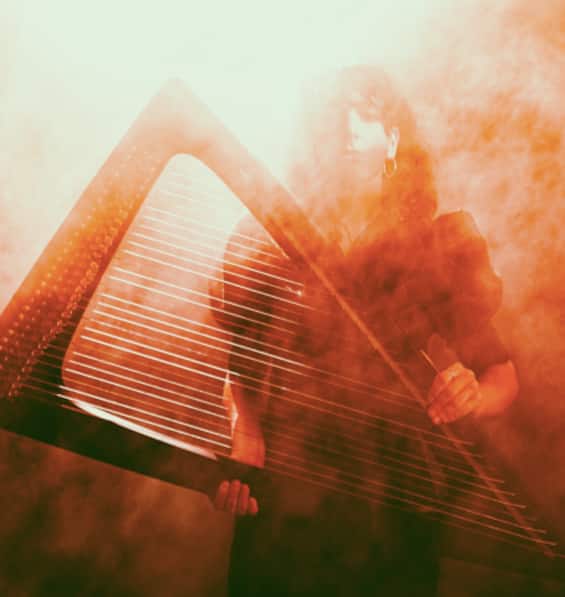 Graduated from the Conservatory of Italian Switzerland in classical harp, which was followed by the specialization with the Master of Arts in Music Performance, Kety Fusco debuts in 2020 with ‘DAZED‘, the album with which the artist receives three nominations at the Swiss Live Talents Awards. Published by Sugar Music, ‘DAZED‘ follows the instinct of Kety Fusco of wanting to give voice to his instrument of choice, the harp. In fact, each composition tells a musical story, accompanied by mostly digital and at times violent electronics, which emphasizes the harp itself. “That’s how I started, trying to use a harp as if it belonged to a female voice. In DAZED my harp sings” he claims Kety Fusco. The disc was presented live in prestigious locations, including Locarno Film Festival, Vision Du Reel Film Festival in Nyon (Switzerland), Arena di Verona, La Notte della Taranta, Montreux Jazz Festival and others, in addition to the opening tour in France at Agnel Obel’s concerts in summer 2022. Among the most important achievements of Kety Fusco to date, her performance in the hall of the Federal Parliament in Bern and the invitation by the United Nations to participate in the SDG Global Festival of Action, virtually sharing the stage with Patti Smith and Ben Harper. While continuing his sound research work, Kety Fusco released a horror soundtrack made solely with harp sounds, which he collected in a digital database titled ‘Beyond The Harp‘, later named by Musicech magazine as ‘the best library of the month’. In 2022 Kety also won the Get Going Project of the SUISA Foundation, thanks to her proposal for a new harp with which she wants to alter the vision of this magical instrument.

The project, ‘THE HARP‘, to be released on the international Floating Notes Records label, represents an exciting new chapter for Kety Fusco: using the materials a classical harp is made of (wood, metal, gut), the artist produces sounds and atmospheres that suggest its deconstruction, manipulating the sound with electronic pedals, screaming inside the soundboard, scratching the bow on the low strings of the harp.


‘THE HARP‘ will be released on vinyl in three chapters over the next three years, starting on 3 March 2023, when the project will be presented, in its entirety, live at the prestigious Royal Albert Hall in London. Anticipated by the single ‘2072‘, arriving digitally January 13, ‘Chapter I‘ is the first chapter of the trilogy, a 19-minute journey that begins with horsehair rubbing against the strings of the harp and ends, for the time being, with controversial sounds and an incessant beating of shrieks inside the soundbox. ‘chapter I’ will be released in digital and physical (vinyl) formats on March 3, 2023. All sounds come from an 80 kilo wooden harp, an electric carbon harp and live electronic manipulation of Kety Fusco. ‘THE HARP’ transports, lets the imagination flow in a contrast of emotions and feelings, confuses. Kety explains that she would like people, after listening to the album, to be left with a bad taste in their mouth, both positively and negatively, a feeling that leads them to think, reflect, act. The composition of the first single, ‘2072’is based on a live granulation of the electric harp, combined with sounds coming from a pulsating soundbox of the 47-string classical harp, to which are added vocal reminiscences emitted by Kety, with scratchy screams decorating this post- classic.