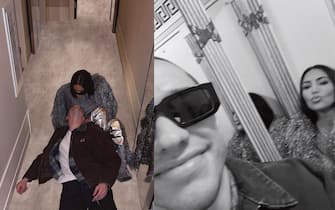 Initially it was just a rumor, but today the love story between Kim Kardashian and Pete Davidson is official. The famous star of American TV and the comedian of the Saturday Night Live they stay together and no longer hide. The first social image dates back to March 11, when Kim Kardashian published a photo with the comedian, taken during a moment of complicity and fun in a hotel

One of the very first paparazzi dates back to October 2021, when the two were caught on a roller coaster in a Californian amusement park. From that moment there has been no shortage of opportunities for photographers to immortalize the two together

WATCH THE VIDEO: Pete Davidson is back on social media

Kim and Pete appeared hand-in-hand for the first official event on April 7, at the reality premiere The Kardashiansin Los Angeles

The Kardashians: all the vips at the premiere of the reality in Los Angeles. PHOTO

Kim Kardashian then posted two images on Instagram with her boyfriend. “Night snack” she wrote, and from the clothes worn it seems that the photos were taken on the day of the premiere

Kim made it known that in the reality show The Kardashians did not shoot scenes with Pete. “I’m not against doing it but … it’s not in your strings” she explained, however specifying that in the case of an event in which the 28-year-old actor is also present “obviously he doesn’t tell the cameramen to leave”

In the past of the two there are illustrious stories. Kim Kardashian was married to rapper Kanye West, with whom she had four children: North, Saint, Chicago and Psalm

Kim Kardashian and Kanye West divorce, the most beautiful photos of the couple

Pete Davidson has had several relationships, the most important being with Ariana Grande and Kate Beckinsale