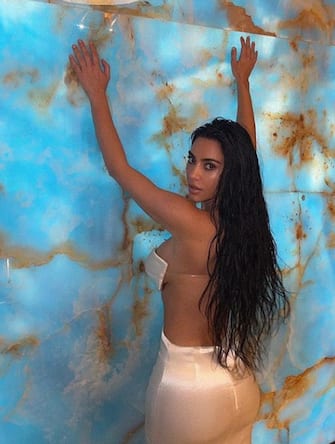 Kim Kardashian has published some shots on her Instagram profile that have thrilled the many followers. The white cut-out dress, fastened by a transparent band at the back, attracted the attention of many, including that of Carmen Electra …

This is because Carmen Electra at the MTV Movie Awards (it was May 30, 1998) had sported the same model, the white dress signed by Stephen Spouse that we see in the photo. The comparison with the one worn by the influencer is immediate.

Carmen Electra: photos of the model

Here is another shot of the reality star “The Kardashians” posted on Instagram showing her tailored suit: the look is practically the same that the former lifeguard wore. Baywatch in 1998

Designed by Stephen Spouse, the particularly low-cut total white dress was worn in 1998 by Carmen Electra at the MTV Movie Awards

7 curiosities about Carmen Electra, the Lani of Baywatch

“I still have this dress I wore to the mtv movie awards in the 90’s 💋 @kimkardashian remade this designer dress and I think it’s flattering not a completion! I think it’s cool 🤘🏼 shouting out love to the ladies always have !!!!!!!! “: these are Carmen Electra’s” sporty “words about Kim Kardashian’s choice.

The Kardashians: all the vip at the premiere of the reality in Los Angeles. PHOTO

“I still have that dress. Kim Kardashian recreated the dress and I think it’s a beautiful thing,” the actress commented on the influencer.

Fashion, like wearing white. Looks to be inspired by. PHOTO

All the phobias of the stars

There are several shots of the time that portray the actress of “Baywatch” in her total white outfit, in 1998 at the MTV Movie Awards

The 90s-style T-shaped cut-out long white dress has made the rounds of the web, garnering acclaim

Fashion, the most loved white denim by stars. PHOTO