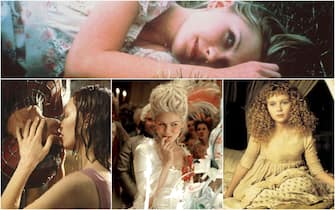 Kirsten Dunst turns 40: was born on April 30, 1982 in the state of New Jersey. She started acting as a child: she was 3 years old in television commercials, then her debut in the cinema in 1989 in New York Stories by Woody Allen. She is 11 years old she is Claudia in Interview with the vampire and from there his career never stops, with awards, acknowledgments, applause from critics and audiences. Here are fifteen of his most famous interpretations

WATCH THE VIDEO: Kirsten Dunst, 5 curiosities about the actress

Interview with the vampire (1994). Kirsten Dunst is not even twelve years old when she plays Claudia in the film based on the novel by Anne Rice: she is the little one that the vampire Louis feeds on, before Lestat transforms her and condemns her to live forever in the body as a child. She directed by Neil Jordan, she stars alongside Tom Cruise, Brad Pitt and Antonio Banderas. For this role she receives her first Golden Globe nomination for Best Supporting Actress

Kirsten Dunst, all the news

Jumanji (1995). The following year she stars opposite Robin Williams, directed by Joe Johnston. She plays Judy, the little girl who, together with her brother, finds the strange board game in the attic and starts the game.

The garden of virgin suicides (1999). Sofia Coppola chooses her for her directorial debut. We are in Michigan, in the seventies. Kirsten Dunst plays Lux Lisbon: together with her four sisters, due to the severity of her mother, she lives segregated at home and without the possibility of socializing. Girls are allowed more freedom after their younger sister’s suicide. Lux also starts dating a boy, but the restrictions soon return and the ending is tragic

The power of the dog, the cast of the film with Benedict Cumberbatch

Girls in the balloon (2000). Great success in the cinema for this comedy directed by Peyton Reed and written by Jessica Bendiger. It tells of a group of cheerleaders struggling with the national high school championship. Dunst plays Torrance Shipman, a senior student at San Diego’s Rancho Carne High School, aiming for a sixth consecutive national title with her cheerleading team.

The best films of Kirsten Dunst

Spider-Man (2002-2004-2007). Kirsten Dunst plays Mary Jane Watson in Sam Raimi’s acclaimed transposition. Also in the cast of the trilogy are Tobey Maguire (Peter Parker), Willem Dafoe and James Franco. The films are a success and increase the fame of the actress even among the general public. One scene, in particular, enters the history of cinema: it is the iconic kiss with Spider-Man hanging upside down, in the rain, after the superhero has saved his beloved.

The right to count, the cast

Mona Lisa Smile (2003). Kirsten Dunst plays Betty Warren, one of Katherine Ann Watson’s (Julia Roberts) students, in this film directed by Mike Newell and set in the early 1950s USA. Roberts is a 30-year-old unmarried art history professor who tries to teach girls at a girls’ school that their primary purpose in life is not marriage. Dunst is one of the most reluctant girls to listen to the teacher, until she discovers that her life is not so perfect.

Eternal Sunshine of the Spotless Mind (2004). In Italy the title of Michel Gondry’s film was translated with If you leave me I delete you. She tells of Clementine (Kate Winslet) who, tired of her relationship with Joel (Jim Carrey), gets the memories of their story removed from her mind. He finds out and does the same, but changes his mind during the process. Kirsten Dunst is Mary: she works at the clinic where memories are erased, she is engaged to technician Stan (Mark Ruffalo) but discovers that she too has been put on trial. It is a success with audiences and critics alike

Elizabethtown (2005). Kirsten Dunst stars opposite Orlando Bloom in this Cameron Crowe comedy. Bloom is Drew, a clothing designer in crisis who is returning to his home country for his father’s funeral. He meets Claire (Dunst), a lively flight attendant who will help him regain confidence and positivity. Also in the cast are Alec Baldwin, Susan Sarandon, Jessica Biel

Marie Antoinette (2006). One of the most beautiful interpretations of him. Directed by Sofia Coppola, she stages a very different Marie Antoinette, more pop and modern, which she denies having said “If they don’t have bread, let them eat brioches”. The story begins with her when she moved from Vienna to Versailles in the spring of 1770, when she was married to Louis XVI at the age of 15 to cement the relationship between Austria and France. Beautiful costumes, with Milena Canonero winning the Oscar, beautiful soundtrack in which vintage music mixes with techno, acid, 80s rock

Melancholia (2011). Directed by Lars von Trier, for this role she won the award for best female interpretation at the Cannes Film Festival. The film tells the relationship between two sisters: Justin (Kirsten Dunst), who falls into depression after marriage, and Claire (Charlotte Gainsbourg), rational and fragile, who hosts her sister in the villa where she lives with her husband and son. All while the Earth is in danger of the impending collision with the planet Melancholia

Midnight Special – Escape into the night (2016). Directed by Jeff Nichols. The film tells the escape of a divorced father who, together with a friend, wants to protect his 8-year-old son from the followers of a religious sect. Kirsten Dunst plays Sarah, the baby’s mother: she too wants her son to stay away from the preacher of the sect she once belonged to along with her ex-husband

The deception (2017). Film written and directed by Sofia Coppola (who won the award for best director at Cannes), with Colin Farrell, Nicole Kidman, Elle Fanning. It is set in Virginia, in the years of the Civil War. Kirsten Dunst is Edwina Morrow, a teacher at the girls’ boarding school headed by Martha Farnsworth (Nicole Kidman). She falls in love with Northern Corporal John McBurney (Colin Farrell), who is taken to boarding school because he is injured. But the man has woven an intricate web of lies to stay safe as long as possible and take command of the facility

The power of the dog (2021). Oscar and Golden Globe nomination for Best Supporting Actress for this role in Jane Campion’s film (which for her direction won the Oscar and the Silver Lion in Venice). Set in the 1920s, it tells the story of the wealthy Burbank brothers who own a large ranch in Montana: bright but violent Phil (Benedict Cumberbatch) and stubborn but always kind George (Jesse Plemons). George secretly marries widow Rose (Kirsten Dunst), Phil refuses to marry and starts a war against her

Fargo (2015). It’s not a movie, but this performance by Kirsten Dunst, which earned her a Golden Globe nomination for Best Actress in a TV Series, also deserves mention. She plays the role of one of the protagonists of the second season: Peggy Blumquist, a provincial beautician who dreams of turning her life around but remains entangled in the vicissitudes of the Gerhardt mafia family. Nomination for Best Actress in a Series also for the role of Krystal Stubbs in On Becoming a God