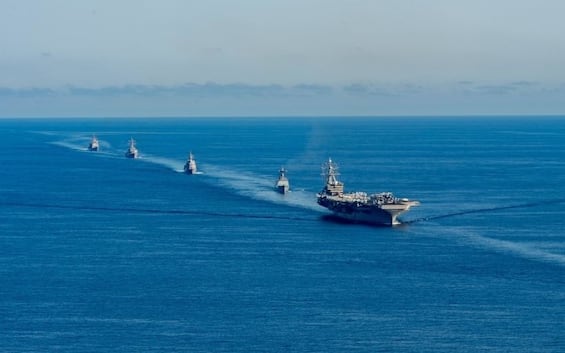 Warning shots fired by South Korea at a North Korean ship after an alleged incursion across the sea border. The news was spread by the Yonhap news agency which underlined how, at 3:42 am, a North Korean commercial ship entered through the ‘Northern Limit Line’ (the ideal line in the Yellow Sea, drawn by the United Nations, always refused from Pyongyang and accepted by the Seoul government instead), near Baengnyeong Island, to retreat to the north after the Southern Navy fired warning shots. The agency then reported that, according to the North Korean military, a South Korean military ship breached the border a few minutes later and that the North fired 10 warning shots in response.

A few hours after this exchange of warning shots comes the announcement of the Seoul Navy: from today until October 27, South Korea will carry out “large-scale” maneuvers in the Yellow Sea. It is “a large-scale maritime exercise that serves as a preparation for enemy provocations”, the South Korean General Staff said, maneuvers in which the South Korean army, air force and coast guard also participate, in addition to US troops. . The exercises will be held in the area of ​​the so-called Northern Limit Line (Nll): about 20 ships of the South Korean navy participate, including frigates or destroyers equipped with the Aegis missile system, coast guard ships and F-15 and F-16 fighters of the Air Force and, on the US side, Apache helicopters or A-10 attack planes.

The maritime border, considered a hot spot, has been the scene of numerous clashes between the two Koreas over the years. But tensions have increased in recent weeks, with Pyongyang carrying out several missile launches and artillery barrages deemed provocative by South Korea and Japan. Seoul and Washington say North Korean leader Kim Jong Un would be ready to carry out what would be his country’s seventh nuclear test.

Tonight’s warning firefight comes on the day US Deputy Secretary of State Wendy Sherman travels to Japan for three-way talks with Tokyo and Seoul (both Washington allies). In October, Pyongyang engaged in military force displays, firing a short-range ballistic missile, firing multiple artillery rounds and sending fighter jets near the South Korean border. Artillery fire occurred in its waters on the east and west coast, in violation of a “buffer zone” established during a 2018 agreement with the South to prevent accidents at sea. Pyongyang claims to respond to Seoul’s “provocations” and has described these weapons tests as simulations of “tactical nuclear strikes” against targets in South Korea.