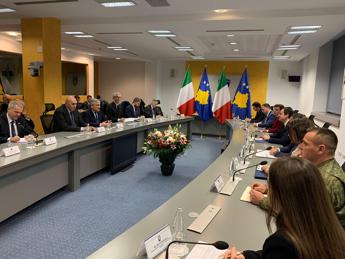 The Foreign Minister: “The one organized here is not a random visit”

(From the correspondent Silvia Mancinelli) – The first extension dates back to this summer. The violent protests, the threats of violent tension, let alone the notices of fines and the invitations to enjoy concessions on car scams have not convinced. Today we are on the verge of a last warning launched by the head of the government of Kosovo Albin Kurti to citizens of Serb ethnicity to convert their obsolete license plates. Forty-eight hours from the entry into force of the measure, which are now already less than thirty: in the meantime the failed mediation in Brussels and the joint visit of two Italian ministers, Antonio Tajani and Guido Crosetto, who met their respective Serbian and Kosovar counterparts today with the aim of being peacemakers and avoiding unilateral initiatives on both sides to reach a compromise that effectively resolves the issue of car number plates. The umpteenth fuse of a tension that flares up and calms, on and off, a fire that has always been burning since 2008, when Pristina proclaimed itself independent.


“The visit organized here is not a casual one, it is the sign that Italy wants to be a protagonist in the Balkans, it wants to have a leading role, to be the bearer of peace. From the very beginning of the worsening situation, in talks with Vucic and Kurti, I said that unilateral initiatives are not needed to solve the problem” said the head of the Farnesina Tajani. Italy is actively involved in Kosovo, with about eight hundred men between the Army and Carabinieri MSU. Since October he has been in command of KFOR, the NATO force here in Kosovo, for the thirteenth time, with General Angelo Michele Ristuccia taking over from Major General of the Hungarian Army Ferenc Kajari.

“Right now we represent the largest contributor among the 27 countries of KFOR – he told Adnkronos on that occasion – and as far as I’m concerned I feel the weight of the responsibility of this position, especially in a certainly complex situation, which represents a moment without precedents in contemporary history”. “We have decided to bring the same weight to the political level that we have had here from the military point of view so far – explained the Minister of Defense Guido Crosetto – If the goal of Kosovo and Serbia is to join the great family of Europe, in a family you need to know how to live together and, when two members of a future family may not get along, the responsibility of the other family members is to make them sit down at the table and get them to agree so that neither of them, however, ultimately feels treated differently than the other”. “We want more Italy on our borders” reiterated the prime minister of Kosovo, Albin Kurti, addressing in his opening speech to the Italian foreign and defense ministers, Antonio Tajani and Guido Crosetto, who met him in Pristina.