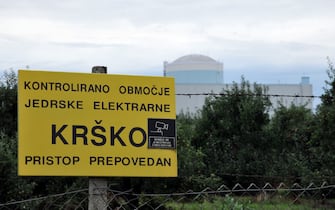 A little more than 100 km from the Italian borderin Slovenia, rises a nuclear power plant: it is the Krško power plant, which came into operation in 1983 and one of which is being discussed in recent months possible life extension until 2043. Legambiente asked the Italian government to ask for the closure of the plant, deemed “old and dangerous”

WATCH THE VIDEO: Nuclear, Cingolani: do not neglect technological innovations

The nuclear power plant of Krško was built in the second half of the 70s and entered into operation in 1983. It was built by Slovenia and Croatia, both of which were part of Yugoslavia at the time

The facility is managed by the company Nuklearna Elektrarna Krško (NEK), the ownership of which is shared between the public energy companies of Croatia and Slovenia. According to information provided by NEK itself, the central it supplies 20% of Slovenian electricity needs and 16% of Croatian electricity

Ukraine, Zelensky: “The whole world must be ready for Russia’s nuclear threat”

The expected date for end of the operation of the plant is on January 14, 2023, that is, after 40 years from its entry into operation. However, it was requested an extension of the life of the facility of 20 yearsuntil 2043

Russia, how many nuclear weapons Moscow has and where they can strike: THE REPORT

In order to extend the life of the plant it is necessary, according to what reported by Legambiente, one Cross-border environmental impact assessment which also involves neighboring countries: Italy, Austria, Croatia, Bosnia and Hungary. Among these, Austria has already expressed a contrary opinion while Italy has not yet ruled

Nuclear weapons, the fastest growing arsenal is in Pakistan

Publicly opposing the idea of ​​the extension is Legambiente: “The Italian Government ask for the closure of the old nuclear power plant by Krško. No more delays are allowed, Italy as a neighboring country can decide on the merits as Austria has already done “, was the appeal launched to the government

“We are talking about one now old and obsolete structureentered into operation in 1983, built in an earthquake zone, without a deposit to dispose of its waste and that Slovenia also wants to expand ”, wrote Legambiente in a statement

“It is important that too Italy takes a firm and decisive position as soon as possible on the Krško case. Our country, which on its territory rejected the atom with two referendums in 1987 and 2011, must be in line with the referendum mandates, saying no to the Slovenian nuclear plant”, Said the president of Legambiente Stefano Ciafani

Furthermore, according to Legambiente the Krško nuclear power plant would have been built in proximity to three active faultsand the most recent seismological studies note that the reactor container was designed to withstand tremors with a PGA (maximum ground acceleration) of 0.3 g

However, the stress tests conducted by the will of the European Union, writes Legambiente, indicate the limit beyond which is 0.8-0.9 g the container could be damaged, with leakage of fissile materialand the most recent studies show that these values ​​could be exceeded by possible earthquakes in the area

Following the earthquake that on 22 March 2020 hit the Zagreb area in Croatia, with a magnitude of 5.5 on the Richter scale, the power plant was preventively stopped to allow checks to the structure. Having found no damage, the structure resumed operation in the following days