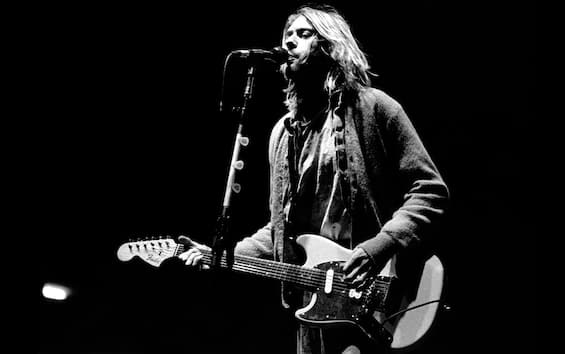 A broken Kurt Cobain guitar sold for nearly half a million dollars last weekend. And with route we don’t mean to say accidentally dropped or irretrievably out of tune: this guitar is worth so much because it was split by the Nirvana frontman himself during a concert, therefore deliberately broken. Strongly deliberately broken, that’s it.

This is a tobacco-colored 1973 Fender Mustang guitar that belonged to the late leader of the Seattle grunge band.
To be exact, it was auctioned for $486,400, exceeding the initial estimate of $400,000.

It was used on Nirvana’s very first tour, the one that took place in the United States in 1989, played in two exhibitions (according to the auction house Julien’s Auctions which handled the sale of this historic musical instrument).

Cobain’s first public live performance was at Club Dreamerz in Chicago, Illinois on July 8, 1989. The second was at Sonic Temple in Wilkinsburg, Pennsylvania on July 9.
Right on the stage of the Sonic Temple there was the rock – and even grunge – ritual of destroying the guitar.
Kurt Cobain smashed it during the final performance of Blew.

At the bottom of this article you will find the image of the destroyed guitar.

The cutaway guitar is signed by Cobain, on behalf of Nirvana

What the lucky one who has managed to grab this piece of music history is a broken guitar, yes, but still played and also autographed by the legendary American musician, who committed suicide in April 1994. It is not autographed in his name but in the name of Nirvana, as the auction documents, attached to this memorabilia, explain in detail.

“After that performance, the band stayed in the apartment of Hullabaloo player Sluggo Cawley, where Cobain noticed a broken Gibson SG hanging on Cawley’s wall,” the auction house’s records said. “Cobain offered to trade it for the Fender Mustang he broke on July 9 because he thought he could fix the Gibson SG well enough to break it again later.”
And Julien’s Auctions documents go on to say that “Sluggo accepted the exchange and asked Cobain to engrave the Mustang, signing it as Nirvana and also drawing two flowers along the upper right side of the pickguard […]. Along the bottom of the guitar body, the inscription reads: ‘Yo Sluggo / Thanks for the trade / If it’s illegal to rock and roll then throw my ass in jail / Nirvana.’

Again as part of the Julien’s Auctions auction, many other noteworthy musical objects were sold.
But let’s step back before we move on to the seven note memorabilia that went on sale this past weekend.

It is necessary to make a parenthesis relating to Julien’s Auctions, a private auction house based in Culver City, California, founded in 2003 by Darren Julien and co-owned with Martin Nolan. This auction house is now a legendary name for those who love rock and even cinema, as they specialize in auctions of film memorabilia, music memorabilia, sports memorabilia, contemporary art and street art.

Among other things, Michael Jackson’s custom-made Gibson electric guitar, also destroyed by its rightful owner, was also beaten: it was smashed into pieces in the video clip of the song Scream. However, it was sold for a much lower amount than Kurt Cobain’s guitar: in Michael Jackson’s case, we’re talking about $87,500, according to the auction house.

Why did Cobain destroy guitars on stage?

Kurt Cobain had a thing for smashing guitars on stage while performing with Nirvana.
When asked by a reporter about his propensity for destroying instruments during shows, Cobain allegedly replied: “Why do I do it? Why not? It’s cool. Someone already cut down a nice old tree to make that fucking guitar. Destroy it! We just do it if the feeling is right; it doesn’t matter where we are.”

However Kurt Cobain was certainly not the only one with an obsession with smashing guitars on stage. The man who turned that gesture into an art was Pete Townshend of the Who. “It is a gesture that arises in the moment. It’s a performance, it’s an act, it’s an instant and therefore it doesn’t make sense,” the Who guitarist declared during a chat he had with the founder of Rolling Stone, Jann Wenner, at the end of a 1968 concert at the Fillmore in San Francisco. When asked about the beginning of that ritual, Pete Townshend replied: “The first time it happened by accident. That evening, like every Tuesday, we performed in a club. While playing, the guitar slammed into the ceiling. It broke and it was a shock, I didn’t want to throw it away, it was a precious tool, but that’s how it went. I expected everyone to think ‘oh f**k, he broke his guitar’ but nobody said anything. So I got pissed off and made up my mind to do something so that the public would notice what had happened. I turned that incident into an event. I went back and forth on stage with the broken guitar, I scattered the pieces all over the place. Then I took the spare guitar and carried on as if it was a deliberate thing”.
When asked by Jann Wenner if he was happy doing so, Pete Townshend replied: “No, the guitar was broken, inside I was unhappy. But the word got around and the next week people came and told me it was about time someone showed them on guitars, stuff like that. It escalated and when we went to a new city people knew we were the ones who destroyed the guitar. Until one day someone from a big newspaper came forward. ‘They tell us you smash guitars. We hope you do tonight, because we’re from the Daily Mail. It would end up on the front page.’
I went to my manager Kit Lambert and asked him if we could afford to destroy a second guitar for publicity. ‘If it’s for the Daily Mail, it’s worth it,’ he replied. I did and obviously the Daily Mail didn’t buy the photograph, they really didn’t want to hear about the story. But I was into it at that point and I’ve been doing it all the time ever since.”

Below you can see Kurt Cobain’s guitar just auctioned by Julien’s Auctions.