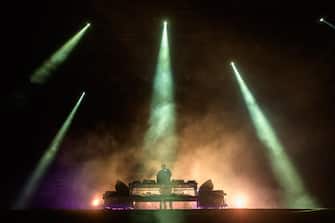 Headliner of the fifth evening: Jamie XX. Born in 1988, British, he is a well-known DJ and record producer. Jamie XX achieved worldwide success as a member of the London band The XX. In 2011 he is among the producers of the album Take care by Drake. In 2015 his first solo album, In Color

About an hour and a half of show, the perfect soundtrack of an early summer night

Jamie XX made everyone present dance with his music, confirming himself as one of the best exponents of electronic music of the moment

Another snapshot of Jamie XX’s performance at “La Prima Estate”

Cosmo is the third artist to perform: he plays continuously from 21.00 to 22.50. The last party, When I met you, The love, Illegal music, You are my city are just some of the songs he brought to the stage. An ovation for the artist, impatient to be able to sing

Cosmo, stage name of Marco Jacopo Bianchi, is an Italian singer-songwriter and record producer. He was the frontman of Drink to Me, but has released four solo albums. The last one is The third summer of love

Cosmo, born in 1982, a true visionary and revolutionary in the world of music, opened his concert with the phrase: “Welcome to the third summer of love”

A still image of Cosmo’s concert at Parco BussolaDomani

The second artist of the fifth day is Mace, one of the most influential producer in the scene hip hop Italian, but also DJ and record company. He has produced songs for Fabri Fibra, Gué Pequeno, Marracash, Noyz Narcos, Salmo, Joan Thiele, Kaos, Gemitaiz, Venerus, Rkomi, Colle der Fomento

His album OBE, released in 2021, became one of the records of the year (and platinum). The single Our Song is one of the biggest and most significant hits of recent years, and helped launch the Blanco name

It is the singer-songwriter Ginevra who opens the fifth day of the “La Prima Estate” festival: at 6.30 pm on time she took the stage and sang her main hits. Ginevra is very close to Cosmo, with whom she performed on the stage of the Sanremo Festival, together with Margherita Vicario and the Lista Representative, in a contemporary version of Be my baby

Ginevra is currently working on a new album, after having also collaborated with Noemi, Cosmo, Margherita Vicario and The Representative Di Lista