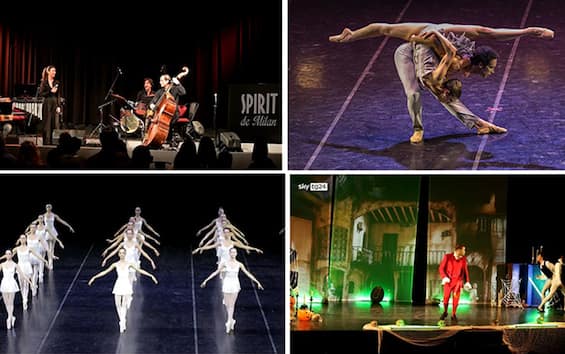 The second edition of La Scala in the city ended with a big party at the Piermarini, in collaboration with the Filarmonica della Scala and the Accademia Teatro alla Scala as part of the “Milano è viva” initiative promoted by the Municipality of Milan, which led to the second consecutive year the theater in all the districts of Milan, from the center to the suburbs. A wave of music and dance that has invaded places that are also usually dedicated to other activities, such as the Allianz Cloud where basketball or volleyball games are usually played. Five days of free shows that involved all the forces of La Scala: choir, corps de ballet, musicians of the Philharmonic and, for the first time, even the students of the Academy. All together to bring the theater to everyone in the wake of the marked outlined by Paolo Grassi.

Meyer: “Let’s go out to meet people, the theater belongs to everyone”

“The idea is to go and meet people who think classical music, opera and ballet are not for them. We are convinced that the theater can touch everyone, you just have to touch that chord that many think they do not have to let everyone discover the beauty of our art “, said the superintendent of the Teatro alla Scala Dominique Meyer during the presentation press conference held, in line with the spirit of the initiative, outside the Piermarini at the Mosso, the redeveloped space inside the Trotter Park, a peripheral area of ​​the city. “You have to make an effort to enter an impressive theater like La Scala, the first step is difficult. We simply want to facilitate this access to culture ”Meyer added.
And so it was. Sold out from the first day, with the children’s choir at the Munari Theater and the Philharmonic at the Spirit de Milan, Bovisa club. The cold and bad weather forced us to review some dates, such as the one scheduled for the Bagni Misteriori which was canceled, and to exploit above all the indoor spaces but they did not stop the event and the desire to participate. Among the places where La Scala gave a show in the following days also the Puntozero theater, in the Beccaria prison, and the Allianz Cloud where the students of the Ballet School first went on stage and then the whole Ballet directed by Manuel Legris . We witnessed this dancing marathon in the sports hall.

The students of the Ballet School at the Allianz Cloud

It is not an easy task to dance where basketball or volleyball games are usually played. Go on stage with the public so close and higher than the artists, with a perspective that is practically reversed compared to the one you are used to, in a space with boundaries to be found and without a single front given the presence of spectators out of three sides, it was a great challenge that even the young students of the Ballet School, directed by Frédéric Olivieri, faced, demonstrating a rare confidence for their age.
The program saw them open the dance with the Presentation, choreography by director Olivieri to music by Johann Sebastian Bach. A great classic that allows students to be presented in the best possible way, as the title suggests. From the first to the eighth course. The program then saw two contemporary choreographies and two extracts from Nutcracker in the version revisited by Olivieri. In detail, the students performed in Wide, choreography by Matteo Levaggi to music by Johann Sebastian Bach performed live by Sofia Bellettini on the cello and with the costumes of Federico Sangalli. With them also Lorenzo Lelli, a splendid dancer who has just graduated from the Ballet School and is ready for the new adventure as a professional in the corps de ballet of the Paris Opera. We then moved on to the pas de deux taken from the first act of the Nutcracker with Rebecca Lucca and Alessandro Francesconi, who have recreated all the magic of the Christmas ballet par excellence. In Variations for Five, by Emanuela Tagliavia on music by Bach, 5 young students have shown great versatility by bringing out a quality of movement very far from the classical and academic world that belongs to them so much. In closing a choral piece of great impact with the Waltz of Flowers by Nutcracker.

The Corps de Ballet and the cheering from the stadium

After the students, the La Scala Corps de Ballet led by Manuel Legris performed at the Allianz Cloud with a very carefully packaged program, capable of ranging from classic to contemporary, from virtuosity to the most refined and “high” choreographies. How Debussy pour sept danseurs by Roland Petit, interpreted with great precision by Martina Arduino and Marco Agostino, or Luminousa real gem of András Lukács which seems to have been created ad hoc for Nicoletta Manni and Timofej Adnrijashenko, luminous and poetic. And from the beginning, a different atmosphere was immediately perceived, much closer to the applause and cheering typical of sporting events. Real ovations welcomed the dancers who bowed in front of the different sides where the audience was arranged. Among the most contemporary choreographic pearls presented also the step two from act II of Project Handel by Mauro Bigonzetti who brought Maria Celeste Losa to the stage in all the beauty and purity of her line alongside Gabriele Corrado, an always solid partner with a great stage presence, or Les Combat des Anges, a famous piece by Roland Petit to music by Gabriel Fauré which once again saw Marco Agostino on stage alongside Claudio Coviello, an always intense artist with a rare musicality. Also on the program are two pieces that had already been included in the Gala Fracci such as Cacucha, by Jean Coralli, with the gracious Caterina Bianchi, and the two steps taken from The street by Mario Pistoni with Antonella Albano and Massimo Garon, tender and intense. Space for virtuosity with Federico Fresi’s surprising jumps in Gopak and to the purest classic that first made Virna Toppi and Nicola del Freo shine in the double step from the second act of Le Corsaire in the version revisited by Manuel Legris, and then the new prima ballerina Alice Mariani and Timofej Andrijashenko next to the La Scala ballet company in the adagio from Paquita.
A show that was then re-presented at the Teatro alla Scala at the end of this second edition of La Scala in the city. Five days that, we are sure, Milan and the artists will not forget. Because, to quote Paolo Grassi, “if the city needs the theater, the theater needs the citizens”.