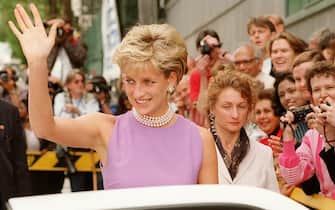 July 1, 2022 Diana Spencer would have accomplished 61 years old. Born in 1961 to Sandringhamin the English county of Norfolkdied at the age of just 36 years old to Paristhe August 31, 1997. In the course of his life already many actresses they had interpreted it on TV and al cinemathen as many films were produced in his memory after death

The Princess, comes the documentary that tells about Lady Diana with archival footage

Between very first actresses that they impersonated Lady Diana there is Catherine Oxenberg (pictured), in the film “The novel of Charles and Diana” of the 1982. That same year another one had also come out, “Carlo and Diana – A love story”with Caroline Bliss as the princess

Lady Diana Spencer, the story of the sad princess in 20 photos

Spencer, the photo of Kristen Stewart for the film about Lady Diana

In the same year the miniseries “The Women of Windsor”. Diana Spencer this time it is played by Nicola Formby (right in the photo)

The same Catherine Oxenberg back, always in 1992to interpret Diana a second time, in the film entitled “Carlo and Diana – Scandal at court” (photo from Wikipedia)

From “Elizabeth” to “The King’s Speech”: 10 films about British royalty

In the 1996 in “The sad princess” there is Julie Cox to impersonate her, in the umpteenth film produced when Lady Diana was still alive

Lady Diana, from “crowded” marriage to the sense of love: her 10 most famous phrases

Lady Diana would have turned 61 today: the photostory of the sad princess

All the news about Lady Diana

And the 2002 when a new movie comes out, “Prince William”with Nicky Lilley in the part of Diana

The Princess, comes the documentary that tells about Lady Diana with archival footage

In the same year it also comes out “Jeffrey Archer: The Truth”with Emily Mortimer as the princess

Lady Diana: William and Harry discover together the statue dedicated to their mother. PHOTO

The actress Emily Hamilton has the part of Lady D in the miniseries “The Queen: The Life of a Monarch” of the 2009

Interview with Diana, the former BBC director resigns from the National Gallery

Harry and Meghan, from the first meeting to the farewell to the Royal Family. PHOTO

Finally, among the latest interpretations there is that of Emma Corrinin the famous TV series “The Crown”of the 2020

The Crown star Emma Corrin shows up on social media with a chest binder. The post

“Spencer” is the film directed by Pablo Larraín released in March 2022: Lady Diana is portrayed by Kristen Stewart

Spencer, the review of the film about Lady Diana with Kristen Stewart