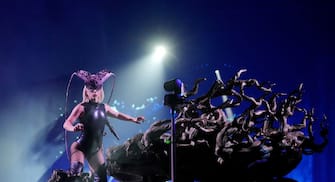 Lady Gaga’s “Chromatica Ball Summer Stadium Tour” has begun. The tour started on July 17 from the Merkur Spiel-Arena in Düsseldorf

WATCH THE VIDEO: Lady Gaga, 10 curiosities about her

It will take the singer to 18 cities around the world, making the pop star return live since 2018

All the news about Lady Gaga

The tour was scheduled for 2020, to bring Gaga’s latest studio album live (Chromatica) but was postponed due to the pandemic

Lady Gaga, the photo before the start of the tour

20 dates are expected around the globe, from New York to London, from Paris to Tokyo. “However, not everything went smoothly in the previous days” we read on Rolling Stone. “Last week, in fact, part of the historic cast of Gaga dancers (some of her were with her from the debut tour of Hunger) left the tour due to differences (there was also talk of mistreatment) with the choreographer Richard Jackson “continues RS

And Lady Gaga on July 16, the day before the tour started, she tweeted the following message: “There was a time when I believed I could never go back to performing live. It was so sad that I could not to dream of nothing but painful nightmares. But I have overcome these nightmares with love, support, truth, courage, talent and dedication. ” Probably her words refer to her state of health: the artist suffers from fibromyalgia

However, the Chromatic Ball Tour got off to a great start: the Queen of Pop performed in front of an audience of almost 60,000 fans in delirium.

Lady Gaga, the new single is Hold My Hand: it will be released on May 3rd

The concert was divided into four parts, complete with a prelude, grand finale and even encore. In addition to the subdivision (typical of the theater), also the sets, the choreographies and the interpretation of Gaga and her collaborators evoked a lot of the theater

Lady Gaga, announced the dates of the tour

The first stop of Lady Gaga’s tour ended with the first live performance of Hold My Handthe song taken from the soundtrack of the film Top Gun: Maverick

Lady Gaga first performed performing songs such as Rain On Me, Alice, Replay, Sour Candy, Babylon, 911 And Free Woman. His hits were not lacking, such as Born This Way, Telephone, Monster And Shallow