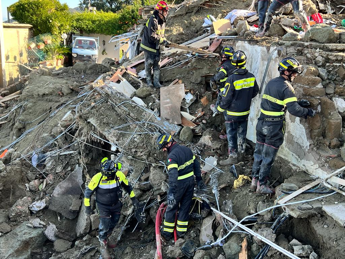 Controversy over Minister Pichetto’s words. The mayor of Lacco Ameno: “he doesn’t know what he’s talking about”

(from the correspondent Elvira Terranova) – The hope of finding Michele Monti still alive, the 15-year-old boy who was missing together with his parents and two other people, died shortly before noon. When the firefighters first identified and then extracted, not without difficulty, the boy’s body from the debris and mud of Casamicciola. 24 hours after the discovery of the lifeless bodies of the two little brothers, 11-year-old Francesco and 6-year-old Maria Teresa. Now they are looking for the bodies of their parents, Gianluca Monti and Valentina Castagna. The other two missing are presumably the companion of Eleonora Sirabella, 31, the first victim found, and another young woman. As reported by the prefect of Naples, Claudio Palomba, at the end of the meeting of the Coordination Center. The wounded remain 5, of which only one immediately transported to the Cardarelli hospital in Naples. The searches continue unabated, with more and more difficulties, due to the complicated access to the site of the disaster in Casamicciola. And a joint meeting of the Rescue Coordination Center (CCS) and the Municipal Operations Center is scheduled for tomorrow.

Three days after the disaster, today was the day of controversy. It was triggered by the words of the former mayor of Casamicciola, Giuseppe Conte who made it known that he had “reported the danger of an imminent natural disaster” four days before the landslide. “I did it out of civic sense, but nobody answered me,” said Conte, who was mayor in the 1990s. The other controversy concerned the words of the Minister of the Environment Pichetto Fratin on unauthorized use. In a radio interview Pichetto said: “I would confiscate illegal buildings and arrest the mayor and all those who let things happen”. The mayor of Lacco Ameno, Giacomo Pascale, answered him immediately, shortly before participating in the Coordination Center: “He surprises me with these statements of his, perhaps the minister does not know what he is talking about…”, he told Adnkronos. “We have had a landslide of enormous dimensions – says the mayor – which came down from Mount Epomeo at an enormous speed dragging everything, so if the minister talks about what happened I find this statement out of place”.

“As regards the rest – adds the mayor of Lacco Ameno – the minister has the power to do what he wants, including arresting the mayor or requisitioning the buildings. We are here”. “Maybe the arrest of a mayor were enough to not experience the disasters,” he says. “I, on the other hand, think that the minister could take charge of a turning point, after years of gossip and negligence, by doing what Governor De Luca says but which is not listened to. Starting with a ten-year plan for securing the territory with a control room, de-bureaucratize procurement and a serious pact between all political forces. That even if the governments change, the program should not be changed. We go from one emergency to another”. Then he added: “They know where I am, I’m attached to this land like a limpet to a rock, come and get me”. “The mayors have always assumed their responsibility, if the minister intends to arrest the mayors he will find me in Ischia”, adds Pascale.

Even the former mayor of Casamicciola, Giovanbattisa Castagna, replies to Pichetto: “I really struggle to imagine that Minister Pichetto Fratin could have made this statement. If so, I think he let himself go a bit…”, he told Adkronos, mayor from 2014 until June 2022, when he was disheartened by his majority. Castagna, who is an engineer, does not want to believe the words of the Minister of the Environment. “I would like to remind the minister – says Castagna – that my municipality, since it was hit by the earthquake in 2017, did not even have a municipal seat”. Then, speaking of unauthorized use in Casamicciola, Castagna explains: “to launch any contract there is a need for a process that lasts a year and a half, from when one starts for the design to the whole process that needs to be done until the company begins work”.

And he adds: “If you go to read the report in the Public Prosecutor’s Office of what was the report of the inspections and complaints received in recent years, I would like to remind you that they were equal to zero. Illegalism belongs neither to mine nor to your generation but to that of the minister”. “My generation takes full responsibility but today we have to pay for the mistakes made even unintentionally by past generations”.

Investigations into the Casamicciola disaster continue. The Naples magistrates want to ascertain whether the houses overwhelmed by the flood and present in that area were illegal and whether a demolition order was pending. The file was opened assuming, at the moment, the crime of culpable disaster. There are currently 230 displaced persons but, as Prefect Palomba said, ”it is not excluded” that the number could grow. The displaced people are all housed in hotels and accommodation with relatives but the prefect underlined that ”since it is winter and we are dealing with families, we are looking for allocations that are real homes also to alleviate their difficult condition”.

Meanwhile, darkness falls again on the island of Ischia. And the firefighters are preparing for another night of work. To search for the last four missing.