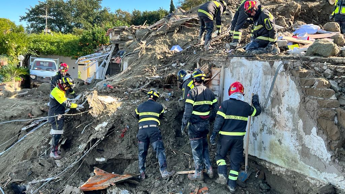 (from the correspondent Elvira Terranova) – While digging continues, night and day, to be able to find the four people still missing after the landslide of Ischia, in Casamicciola, before the return of bad weather, the controversies flare up over the appointment of the extraordinary commissioner for the emergency of the small town of Ischia.

The fuse was triggered by a letter sent to Palazzo Chigi by the Campania Region in which it expressed a negative opinion on the appointment by the Council of Ministers of Simonetta Calcaterra as commissioner for the Casamicciola emergency. The Prefect Calcaterra has been extraordinary commissioner of the Municipality of Casamicciola Terme since last July, after the dissolution due to the lack of confidence in the mayor Giovanbattista Castagna. An appointment decided on Sunday by the Council of Ministers. But the opinion of the Campania Region is binding. To throw water on the fire is the Prefect, Claudio Palomba during the press conference in a four-star hotel in Casamicciola. “The procedure requires the CDM to decide and the head of the department to appoint in agreement with the Region. It is a knot that will be resolved very soon. We all realize that there is this need”, he explains.

In the meantime, the Naples Public Prosecutor’s Office is also investigating the unheeded alarms that the former mayor of Casamicciola, Giuseppe Conte, had sent via certified email to local institutions: the Prefecture of Naples, the prefectural commissioner of Casamicciola, the Municipality of Naples, the Campania Region. The former mayor of Casamicciola, less than a week ago, had sent certified e-mails to report the hydrogeological risk, but remained unheard. The Prosecutor of Naples has opened an investigation into culpable disaster, culpable landslide and manslaughter against unknown persons on the events in Ischia and will appoint a pool of consultants to carry out checks on the territories and homes affected by the landslides.

“The work is continuing and the expedited emergency plan will be ready by the weekend”, says prefect Palomba. The day began with a meeting of the rescue coordination chaired by the Prefect. Which was attended by the mayors of the island and the heads of the police forces of Naples, in addition to the metropolitan mayor, Gaetano Manfredi. During the morning, word had spread that the firefighters would have identified and begun to extract the lifeless bodies of the parents of the three Monti brothers found in recent days. But it was the Prefect who denied the news, underlining that “there were no finds mentioned, we hope it will happen but at the moment we are at yesterday’s numbers”.

During the summit, the point of the emergency in Casamicciola was made. And it was decided, among other things, that schools will reopen on Saturday. Not only. “We have heard that some people do not want to leave their homes for fear of looters, we can tell these families that an anti-looting garrison by the police forces will be guaranteed”, says the Prefect of Naples.

Meanwhile, there are at least 280 displaced people in Casamicciola. Of these, 179 are guests in hotels and the rest are guests of family or friends. The Northern League undersecretary Giuseppina Castiello also attended the press conference. She who did not spare a few shots at the Minister of the Environment, Pichetto Fratin, who yesterday had wished “the arrest of the mayors” and the “confiscation of abusive houses”. “It was an unhappy express. I’m here to represent the Government and to reiterate my support for the mayors who are in the trenches”, she just says. You then added: “The mayors should not be left alone but supported by the government”.

Commissioner Simonetta Calcaterra also wanted to explain that she feels “personally the closeness of the prefect and the government. This is very important to us”. Then he added: “The population affected by the landslide is accommodated either independently or in hotels and, fortunately, is supported on a daily basis in all needs. In the short term, we will also try to allow them to return safely to the apartments to collect some useful personal items. For the rest, I can say that the machine is moving forward and we will try to work above all on assistance to the population and on the restoration of the road network as a priority”. This closeness “is very important for us. In the landslide emergency it is possible to build a support machine capable of helping us even in anticipation of a future need”, she says again. It is necessary “to work on the fronts of assistance to the population and at the same time to understand what to do immediately to prevent this from happening is really intense work”.

“We have identified some primary needs to which in recent days and today we had a prompt and immediate response – explains Calcaterra – I feel supported and I thank the prefect and the government for all the support provided. Soon we will allow the safe return to the apartments to recover personal items “. Meanwhile, again today, the news emerged that Casamicciola lacked an “updated shipping plan”. In other words, a provisional emergency plan for the Municipality of Casamicciola framed in a broader context. The new provisional plan, which should be ready by the end of the week, updates that of the Municipality of Casamicciola after the flood events on Saturday and is aimed at guaranteeing assistance to the population in the event of new emergencies. It will still be operational before the worsening weather conditions. In the meantime, the fire brigade is expected to carry out an initial visual inspection of the buildings located in the affected area. At the moment the verification will be carried out on a thousand buildings.

Some of the mayors present at the meeting also took the floor today. They are all asking for “silence” and “to stop looting”, taking it out on the journalists: “What happened in Casamicciola is not the fault of the unauthorized use”, say in unison Giacomo Pascale and Francesco De Deo, respectively the mayors of Lacco Ameno and Forio of Ischia. “The victims lived in a white area – said De Deo at the end of the summit of the Rescue Coordination Center in Casamicciola – and the landslide mostly affected an area classified as white”. “We do what we have to do and quickly – says De Deo -. Because it is not possible that this island should sink due to natural disasters, first the earthquake, then the flood, within 5 years”.

In the meantime, an Ischia decree law, with aid to the areas affected by the landslide, should be examined by the Council of Ministers on Thursday. Among the measures being studied to be included in the legislative decree, for the areas in which a state of emergency has already been declared, the municipalities of Casamicciola and Lacco Ameno, there would also be the suspension of taxes until the end of the year, with a commitment to renew it in 2023, the extension of the obligations for professionals who cannot work due to the damage caused by the exceptional meteorological events that hit the island on Saturday, and the extension for another year of the dismantling of the branch courts. Meanwhile night falls again on Casamicciola. And the bodies of the parents of the three Monti brothers still lie under the mud, together with that of a man and a young woman.