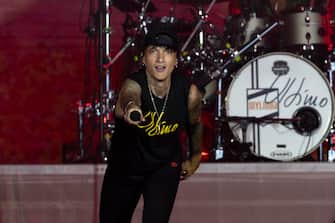 Self-referential sleeveless T-shirt (the writing in yellow is Ultimo), jeans, cap on the contrary: here is Ultimo, aka Niccolò Moriconi, on the stage of the concert in Rome at the Circus Maximus. Photo: Ansa

WATCH THE VIDEO: Ultimo, in concert at the Olympic Stadium

The concert stage was more than 30 meters high and more than 60 meters wide, made up of two U’s, one vertical and one horizontal, which brought him into the midst of his beloved audience. Photo: Ansa

The lineup of the Ultimo concert in Rome

Last he sang non-stop almost without pause. For the intro he was accompanied by the piano, after which he moved on to his typical sounds, mixing pop and rock. Photo: Ansa

The lineup of the Ultimo concert in Catania

Among the songs sung by Ultimo at the Circus Maximus, stand out “Those boys”, “Where the sea ends”, “Fall in your eyes”, the new single “Come in my heart” and “Nothing”. Photo: Ansa

Last in Modena, a concert where you love life and chase dreams

Among the 70 thousand fans in raptures there were numerous VIPs. From Mara Venier (with a bandana on her head dedicated to the singer-songwriter) to Lorella Cuccarini, from Manuel Bortuzzo to Ludovica Martino, the stars who have met at the Circus Maximus are many. Photo: Ansa

Last in concert in Modena, all you need to know

Before the last part of the concert, Ultimo offered some advice to the boys: “Live inside your passion, your plan A, without a plan B, you have to be obsessed with it.” Photo: Ansa

The lineup of the Ultimo concert in Pescara

The audience in raptures. Grand finale with an encore. The song “Sogni appesi” is introduced by a race under the stage, touching the hands of its audience. Photo: Ansa

All the news about Ultimo

The final scream with which the concert ends is: “We won!”. Photo: Ansa

Concerts and festivals in July 2022

A homecoming worthy of an Emperor: for the young Roman singer-songwriter accustomed to pop star numbers (52 platinum records, 17 gold records, more than a billion total streams on the Spotify channel, 550,000 tickets sold in the new tour started in June) 70,000 people came to cheer him. Photo: Ansa

Last in Turin, the lineup of the 2022 concert

70 thousand people at the sold out concert for the return home of the Roman singer-songwriter, born in 1996. A resounding success for the live scheduled for the first time in 2020 and then postponed due to Covid. Photo: Ansa

Ultimo and Ed Sheeran, the duet will be released on Friday 6th May

There were 70,000 people of all ages to welcome Ultimo on the placo. The whole audience sang the songs of the artist at the top of their voices. Photo: Ansa

Here is Ultimo as he encourages the crowd to sing his songs during the live at the Circus Maximus. Photo: Ansa

And here he is while he reaffirms the concept: a great emotion to hear 70,000 people singing your songs in chorus. Photo: Ansa

“How nice that I can speak Roman quietly” says Ultimo to introduce one of his more personal songs in the second part of the concert, namely “Fateme cantà”. Photo: Ansa

A “Fateme cantà” follows his “Poetry for Rome” dedicated to his city and written in 2019. Photo: Ansa

Among the verses of the song “Poetry for Rome” you can listen. “It is a losing battle with corrupt politicians but you talk about it and then laugh because in Rome you fuck with it (…)”. Photo: Ansa

The concert stage was more than 30 meters high and more than 60 meters wide, made up of two U’s, one vertical and one horizontal, which brought him into the midst of his beloved audience. Photo: Ansa