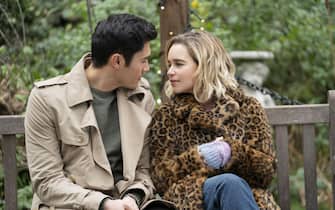 Last Christmas is a 2019 romantic comedy set in London. Now becoming a Christmas cult, the film was directed by Paul Feig, while the screenplay was written by Bryony Kimmings and Emma Thompson

The film takes its title from the worldwide Christmas hit Last Christmas by George Michael and Wham!. The soundtrack includes the hit and other songs by the band and the solo singer

Last Christmas, the soundtrack of the film

Emilia Clarke is Katarina Andrich. ‘Kate’ has found a job as an elf in a Christmas specialist shop in central London, which remains open every month of the year

Katarina has artistic ambitions and doesn’t want to work as an elf all her life, so she auditions and here she meets Tom Webster

Henry Golding is Tom Webster, a volunteer in an association that takes care of the homeless in London or, at least, so he tells Kate

Sky Cinema Christmas, a channel dedicated to Christmas to experience the magic of the holidays

Emma Thompson is Petra Andrich, the mother of Kate, a woman of Yugoslav origin who has long been suffering from depression

Emma Thompson, the best films with the actress in 10 pictures

Petra is a fickle woman, with whom Kate doesn’t have a great relationship

Michelle Yeoh as Huang Qing Shin / Santa, Kate’s chief manager, for whom Kate arranges a meeting with a Danish man who will become her mate

The best Christmas movies to watch with the family. PHOTO

The 20 best movies with Santa Claus to watch during the holidays. PHOTO

Boris Isaković as Ivan Andrich, Kate’s father, a former lawyer who, unable to practice in the UK, works as a taxi driver

Rebecca Root as Dr. Addis, the doctor Kate goes to at a time when her health seems to be giving her some problems

Patti LuPone as Joyce, one of Kate’s new friends