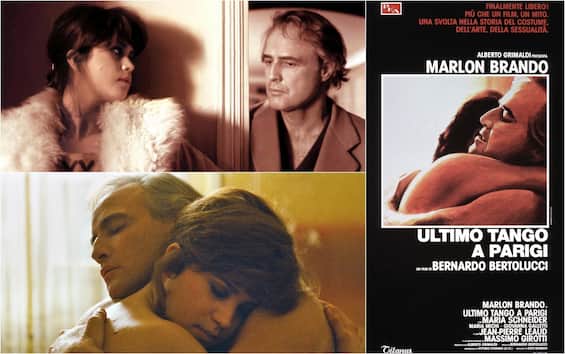 Few films in the history of cinema have linked their fame to the hype and scandal aroused as it happened with Last tango in Paris. Discussed and criticized, censored and burned at the stake: Bernardo Bertolucci’s cult turns 50. It was October 14, 1972 when it was screened in its entirety in New York, as a world premiere. It was the film that launched the international career of the Emilian director, delivering immortality the relationship between the mature Paul (a decadent and tormented Marlon Brando) and the very young Jeanne (a semi-unknown Maria Schneider who was deeply marked by this film ). Then came the condemnations for obscenities by the Church for the sex scenes, the criminal trial and the censorship that led to the sentence of the Cassation that burned the film, the rehabilitation arrived only in 1987. Here is all there is to it. know about the movie.

The search for the actors

The then 30 year old Bertolucci, fresh from the good success obtained with The conformist, in 1971 proposed his new project to Paramount, which was not interested. The producer Alberto Grimaldi instead accepted and began the casting. Initially the protagonists were to be Jean-Louis Trintignant and Dominique Sanda who had worked with the director on his previous film. The French actor turned down the part after reading the script while Sanda was pregnant and declined the offer. Jean-Paul Belmondo and Alain Delon were also contacted for the role of Paul but nothing came of it. He then came up with the name of Marlon Brando, in those months engaged in the filming of The Godfather. He was offered $ 250,000 and 10% of the proceeds and he accepted. The not even twenty year old Maria Schneider is hired for the part of Jeanne. “I read the script and found nothing outrageous or impossible in it,” the French actress recounted years later. For his love song for the nouvelle vague, Bertolucci then relied on Jean-Pierre Léaud and Massimo Girotti for the supporting roles of Tom and Marcel. And he confirmed the collaboration with Vittorio Storaro (after The spider strategy) to immerse “his” Paris in soft, livid and anti-naturalistic tones. The soundtrack was composed by Gato Barbieri and is a melancholy jazz played on the rhythms of tango.

The screenplay for the film was written by Bernardo Bertolucci and Franco Arcalli, with the support of Agnès Varda for some additional dialogues. Finally it was adapted by Robert Alley. The film follows the story of Paul, a 45-year-old American who lives in Paris. After his wife’s suicide, he lives lost, wandering aimlessly and aimlessly through the city. He accidentally finds himself seeing a rented apartment at the same time as 20-year-old Jeanne. An immediate sexual attraction arises between the two: the two start a relationship in which they remain almost unknown without even revealing their name to their partner. Jeanne falls in love with her but Paul leaves her. After some time, however, he also finds himself in love with her and follows the young woman into a dance hall where a tango competition is held. The two get drunk and Paul finally tells Jeanne about her life and proposes that they move in together. But when the girl abandons him, he drunk after her and she reveals her name for the first time before killing him by shooting him with a gun.

Censorship and the scandal

After the premiere in New York, the film was released in Europe in December 1972. And immediately the problems with the sex scenes present, in particular the famous and controversial “sequence with butter” came. The Vatican led a crusade to ban the film in Italian cinemas. The film was seized on December 30, 1972 for “exasperated pansexualism for its own sake.” Thus began a judicial process that initially led to an acquittal but in the subsequent degrees of judgment it then came to sentences up to the definitive one in the Supreme Court in 1976: the film was destroyed. Grimaldi, Bertolucci, Arcalli and Brando were sentenced to a few months in prison (with conditional suspension of the sentence) for “offense to the common sense of modesty.” Bertolucci was also withdrawn for 5 years the right to The director also appealed to the then President of the Republic Leone and in the end there was the concession to save from the symbolic stake only three copies that remained in custody at the National Film Library as a “body of the crime.” Over the years, the judgments on the The offending scenes softened and in 1987 the censorship rehabilitated the film, allowing it to be distributed in theaters (and later also on TV). a secretly kept a copy. The full version of the film lasts 136 minutes but has been censored and shortened in many countries.

The butter scene caused a real scandal in Italy. “The idea of ​​how to turn it came to me and Brando while we were having breakfast sitting on the carpet of the Parisian apartment and at a certain point he started spreading butter on a baguette: we immediately gave each other a complicit look”, Bertolucci said. “We decided not to say anything to Maria to have a more realistic reaction. I wanted to have her reaction not as an actress but as a young woman. And she reacts: she cries, screams, feels hurt. life has almost been haunted by this. “Schneider stated that if she could go back she would not have shot that scene and repeatedly said that it was not foreseen in the script.” I was 20 years old and I did not understand anything. Brando and Bertolucci manipulated me, using me without any regard. It took me many years to forgive. At that time I was really angry “, explained the actress who also thought of leaving the cinema after what happened. Psychological imbalances and years of addiction followed. za from narcotics. Only on her untimely death in 2011, at the age of 58, after a long illness, did Bertolucci admit for the first time that he wanted to “apologize.” Another controversial element of the film was her verbal violence that could touch Catholic sensibilities. with the equally famous “blasphemous prayer” on the institution of the family which perhaps offended more than nudity.

The film, although heavily limited by judicial events and censorship, or perhaps even favored by this, was a resounding success with the public. It was the second highest-grossing film in Italy in the 1972-1973 season. After rehabilitation in 1987, it became the largest ever grossing in Italian cinema with about 87 billion lire collected, a record held until 1997 when it was surpassed by Life is Beautiful by Benigni. Furthermore, according to data up to 2016, the film is the second ever for the number of tickets sold (over 15 million paying spectators). The box office success was also enormous in the US, with an overall figure earned in the world close to 100 million dollars. The film also received two nominations for the 1974 Oscars (Best Director for Bertolucci and Best Actor for Brando), two Golden Globe nominations, one for the Bafta. In 2021 it was announced that the making of the film will become a CBS series, titled Tangowhich will be directed by Lisa Brühlmann (Killing Eve) and José Padilha (Narcos). The three points of view of Brando, Bertolucci and Schneider will be used to reconstruct the 18 months before, during and after the production of the film. Three very different views: a success for director and actor while, on the contrary, the leading actress lived a traumatic and humiliating experience that marked her existence.