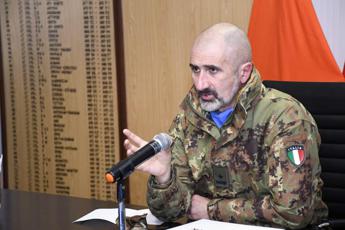 (From the correspondent Silvia Mancinelli) – While a shouted war is being fought in Ukraine, amid the din of bombs and missiles raining down on hospitals, theaters and inhabited centers, in Lebanon – where Adnkronos is following the Unifil mission – the ceasefire fire whispers anger between rockets launched and artillery shots returned to the sender. All demonstrative acts without damage or victims, which however give the sense of a peace never signed and which are repeated without too much noise. “It is like when you finish making the barbecue and under the fire that you believed to be extinguished embers smolder – says General Massimiliano Stecca, commander of the sector west of the Unifil mission and, in Italy, of the ‘Pozzuolo del Friuli’ Cavalry Brigade – in course of a press point at the base of Shama – You get distracted for a moment, you relax, you don’t think about it and the fire rages. It happened on 25 April, which for us Lagunari is a very important anniversary, San Marco. A rocket on one side, artillery on the other, both ended up in the open countryside: for them, normality, for us a warning to always be ready, bulletproof vest and helmet close at hand ”.


It is a fragile equilibrium, the one on which our Army soldiers on mission are moving to give the new generation a future without running in the basements. A stable instability, as they say at the base, which stands along a thin armistice line no more than three or four millimeters on the map but which, on the border with Israel, is in fact a four-meter high wall with a ghostly electrified grid at the top.

It is the Blue Line, until a decade ago a simple limit marked by blue pylons placed one kilometer from the other, which today in some parts precedes that modern Berlin wall of reminiscence. This falls into the sea, and it doesn’t end. “It is a living organism, which evolves and seems to have a life of its own”, defines the general. It simply continues on a trail of buoys, also the object of the dispute between the parties, too shifted up according to some, too acute, as an angle, according to the others.

Beyond all this, in the same territory that from above seems to be fed by different rains, one luxuriant, the other barren and wild, there are resentment, false indifference, not recognizing oneself. “The Lebanese never mention Israel, they call it occupied Palestine – comments the commander of the Brigade – Their resilience is all here, in living a delicate situation and at the same time having to think about bringing food home, in a state that is now very poor “.

Yes, because today that land that was once called the Switzerland of the Middle East is a state transfigured by the economic crisis, where dark and lightless buildings, degraded by neglect, are a punch in the stomach for the very close Hollywood women of Lebanese who all abroad have made it, some are among the richest in the world. Lebanon will go to the polls next week, but no one expects politics to hold the keys to the turning point. The elections will hardly change anything with the current political system, the perception is that there is a simple alternation in power, not a true democracy, that the institutional offices are already established, regardless of the turnout.

For sixteen years, since the Italian Leonte mission started, the Lebanese have not known war. And it is on them, on the children aged 16 and under, that we aim for a future of peace. “The Lebanese are tired of the permanent state of war, the children have not experienced it. And they are the hope of this country ”explains General Stecca, responding to the Adnkronos in relation to the risk that peace could vanish once the mission is over, as was the case in Afghanistan. Crumbling like a house built of brittle concrete.

“There are the pillars, the young people. When I go to talk to the mayors, especially those of the villages along the Blue Line or in any case in the strip that was occupied by the Israelis during the various wars, almost everyone at the end of the visit shows me a photo album of their village after the occupation, a pile of rubble, they often show me what was their home, under which a mother and a brother remained. With this generation there is no possibility that they will make peace and vice versa “.

“But – he observes – today’s little ones were born and raised in a Lebanon that, thanks to Unifil, has no longer been invaded, has no longer had wars: it is on them and for them that we are working. rancorous, they are happy first that their children do not have to grow up with the worry of having to lock themselves in the cellar or stay under a table. They are receptive, they are made like us. I find this to be a model that works here “.