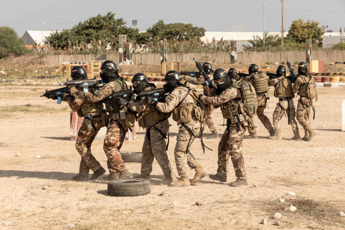 A few weeks after the renewal of the resolution of the United Nations Security Council which legitimizes its presence in Lebanon, the Italian Blue Helmets of the UNIFIL mission (United Nation Interim Force in Lebanon) continue relentlessly to ensure control of the vast area of ​​responsibility together with the Laf (Lebanese Armed Forces), whose support is one of the pillars on which the UN mandate in the Land of the Cedars is based. Cooperation, interoperability and coordination are the fundamental parameters on which the constant training activity conducted daily by the soldiers of the Italian maneuvering battalion operating in the western sector of the UNIFIL operations area is based, entrusted to the command of Brigadier General Giuseppe Bertoncello, who he also holds the role of commander of the National Contingent.


The last training module just concluded, developed jointly with the 5th Brigade of the LAF, had as its scenario the operational approach in inhabited centers, with the aim of harmonizing the respective technical-tactical procedures. In particular, the training progression saw, in its initial phase, deepen the techniques of joint movement and the formations of a mixed patrol, to then focus attention on the environmental remediation of individual buildings of various conformation and nature. During all phases, the injury of team members, their stabilization by military rescuers and subsequent exfiltration on tactical means were simulated. To raise the level of correspondence to the training reality, ammunition from simulation to marking nose cone was also used.

For joint training with the Lebanese Armed Forces, the Italian-led Command of the Western Sector of UNIFIL periodically puts in the field experienced Officers in the field of operational and training planning, organizing with instructors from the 5th Aosta Infantry Regiment of Messina and the Lancers Regiment of Aosta (6 °) of Palermo intense training activities in the Chewakeer polygon area, near the ancient Phoenician city of Tire. This has allowed over time a real amalgamation between UNIFIL and LAF peacekeepers, thus ensuring an increase in mutual support, greater knowledge, better cooperation and coordination, for the purpose of a more efficient and effective use of the respective resources and the instrument. operating.

The Italian mission in Lebanon led by the “Aosta” Brigade, in its third mandate in the Land of Cedars with the colors of the United Nations, is responsible for the Western Sector of UNIFIL in which 3,800 Blue Helmets from 16 of the 48 contributing countries to the UN mission operate and which includes over 1,000 Italian Blue Helmets. The activities carried out in the Operational Theater are conducted under the coordination and according to the directives given by the Operational Command of Vertice Interforze (COVI), led by the Army Corps General Francesco Paolo Figliuolo.

COVI is the staff body of the Chief of Defense Staff, responsible for planning, coordinating and directing military operations, national and multinational joint exercises and related activities.