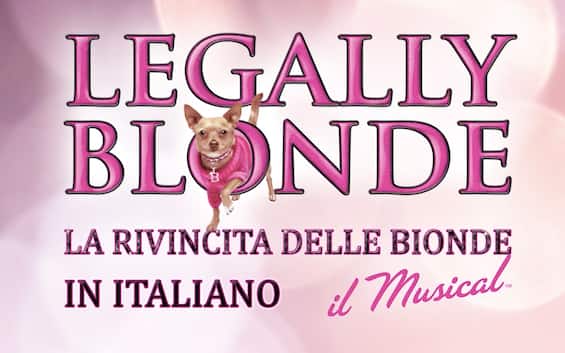 During the car ride to the health club where Windham-Vandermark is located, Elle suggests to Emmett, “You should trust people more, you’d be surprised.”

Trust in others and in oneself while intent on following what is impossible to hide from the heart, these are the secrets of success of Elle Woodsthe protagonist of the film The revenge of the blondesoften known by its original title Legally Blonde, which has entertained generations of viewers by encouraging them to pursue their dreams. After the success registered at Broadwaythe musical, inspired by the film directed by Robert Luketicwill arrive in Italy touching four cities: Milan, Genoa, Florence and Turin.

Debut is set for Wednesday 1st February on the stage of Arcimboldi Theatre of the Milanese capital.

There are some films that those born between the 80s and 90s cannot fail to know and love, we are talking about comedies that can tell the dreams and loves of an era by destroying prejudices and stereotypes to bring out the essence of people without neglecting elements of fun, an example above all? The revenge of the blondes.

The film with Reese Witherspoon will be the protagonist of the musical arriving in Italy with the direction and choreography of Matteo Gastaldo and musical supervision by Fabio Serri. After visiting numerous countries, including Australia, France, Sweden, Canada, Brazil, Finland and Mexico, the Italian public will be able to admire the show which has met with critical acclaim, triumphing as Best New Musical to the WhatsOnStage.com Awards 2011 and winning five prestigious nominations Olivier Awards.

The musical will be based on the novel by Amanda Brown and inspired by the film that at the fifty-ninth edition of golden globe received two nominations: Best comedy or musical film and Best Actress in a Comedy or Musical. The film stars Luke Wilson, Selma Blair, Matthew Davis, Victor Garber, Holland Taylor and Jennifer Coolidge as the iconic Paulette Bonafonté.

Legally Blonde – The revenge of the blondes will debut on February 1 at the Teatro degli Arcimboldi in Milan and will be on stage until February 5 for a total of six appointments. Lucy Blanco and Claudius Zanelli will be Elle Woods and Emmett Forrest, also in the cast David From Otherwiseof which we recall, among the numerous and famous works, Grease, Flashdance and Shrek the Musical.

This the official synopsis of the musical distributed on the Arcimboldi Theater website: “Elle Woods is a lively, fashionable, sweet and above all blonde girl. President of the women’s fraternity at the University of California, she seems to have everything she wants until her life is turned upside down by her boyfriend who, not considering her serious enough, leaves her to attend law school at Harvard. Determined to win him back, Elle uses her wits and charm to get herself into the prestigious university. Studies start with difficulty due to conflicts with her snobbish classmates, who disapprove of her clothing and deem her inadequately prepared ”.

The plot continues: “The initial difficulties lead Elle to imagine the appearance of her former schoolmates, who, like a ‘Greek choir’ visible and audible only to her, incite her to think positively. In addition, with the help of her new friends, Elle discovers that with her skills and her knowledge of the law, she is able to concretely help others, so much so that she successfully defends personal trainer Brooke Wyndham from a murder charge. , surpassing all expectations”.