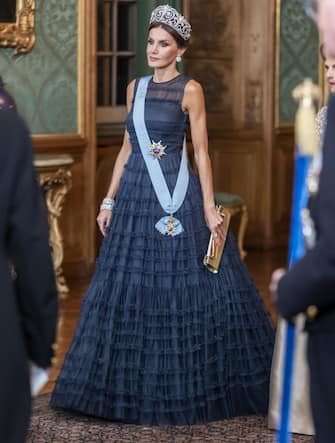 Letizia Ortiz in a navy blue dress at the gala dinner held in Stockholm, while the Spanish royals were on an official visit to the Swedish royal family. The queen consort of King Philip VI of Spain chose a long dress from the H&M brand, probably selected to pay homage to the “hosts” she was a guest of since H&M is a Swedish brand.

Letizia of Spain enchanted everyone with an H&M dress, worn on the occasion of the official visit to the Swedish royal family. Precisely because she was a guest here, the queen chose an outfit from the Swedish low-cost and fast fashion giant as her look.

In May 2019 Letizia Ortiz delighted everyone wearing a navy blue Mango jumpsuit. In addition to being the queen of low cost fashion (together with Kate Middleton), Letizia is also the queen of recycling: many dresses are worn countless times by her, in a virtuous and anti-waste cycle. This jumpsuit has been worn several times, as we will see shortly.

Another dress Letizia Ortiz loves to wear is this one, with a green background and an exquisitely retro floral pattern. This is a dress from Zara.

Queen Letizia is a lover of jumpsuits. Here she is in July 2020 in Cuenca, Spain, sporting an elegant jumpsuit from the Spanish brand Mango.

Here is Letizia Ortiz in Palma de Mallorca, Spain, in August 2019 while wearing another of her beloved jumpsuits. This too is from the Spanish low-cost fashion brand Mango.

Fashion, the casual (and regal) charm of summer wedges. PHOTO

Who’s back? The Mango navy blue jumpsuit we talked about earlier! The queen of Spain wears it here for a more elegant occasion, in fact, accompanying it with a belt and a pair of golden sandals. It was 2015.

Royal low cost dress, the most sought after dresses are by Kate Middleton and Letizia Ortiz

Here is Queen Letizia of Spain in May 2019 as we see her wearing a sleeveless top by Zara.

Letizia of Spain, the queen chooses a low cost dress

Here, on the other hand, she sports a python skirt, also by Zara. A garment that immediately became trendy after the first appearance of Queen Letizia with this animal print skirt. As with so many other garments she has worn, this one has also been repeated several times, on several occasions. Here we see Letizia of Spain in December 2019, in Madrid.

Fashion, Princess Victoria of Sweden says no to stilettos. PHOTO

Queen Letizia of Spain in June 2020 on an official visit to Tenerife, Spain wearing a Zara dress. Even this dress, like almost all of those worn by Letizia Ortiz, sold out in a few minutes after the first appearance of the queen who wears it.

Great Britain, the Spanish royals on a state visit. PHOTO

Queen Letizia of Spain in July 2019 in Madrid with a Zara tweed dress.

In September of 2020 in Navarra, Spain, here is Queen Letizia with a gray checked top from Zara. Letizia Ortiz chose this look to celebrate the start of the 2020-2021 course of the “Nuestra Señora del Patrocinio” school, in Navarra.

Instead, to attend the 30th anniversary of the University of Salamanca, in Spain, Queen Letizia opted for a low cost dress by Massimo Dutti. Don’t be fooled by the Italian-sounding name: this is also a Spanish signature, as fashion lovers well know

In these hours, the navy blue H&M dress worn by Letizia Ortiz in Stockholm on a visit to the Swedish royal family is on everyone’s lips but let’s remember that in December 2019 the queen of Spain had already proved that she was a fan of the fashion giant swedish, wearing a very elegant black skirt by H&M that immediately became a cult. This skirt paired with a white blouse was chosen as the outfit for COP25, the UN-organized climate su Mit of 2019.