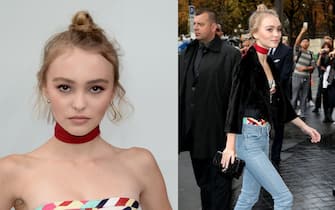 With a filmography of over ten titles behind it, Lily-Rose Depp, who turns twenty-three this year, has a very broad future ahead of her in the field of cinema, but it is fashion that has offered her the first real international showcase. In 2015 Karl Lagerfeld chose it as face Chanel and invites her to the fashion shows of the maison where she begins to get noticed for her fresh style and for the messy bun, a hairstyle that will become a bit of a trademark

Lily-Rose Depp becomes Chanel testimonial like her mother before her. The young protagonist of the L’Eau N ° 5 campaign shares features and natural elegance with the most famous French actress. Soon, she begins to appear in public with a make-up that emphasizes the look with dark accents

26 children of famous people who are the same as their parents. PHOTO

Her connection with Chanel leads her to show for the Metier d’Art collection. Here she is on the catwalk in 2016 with a black & white gradient make-up. Her style is more and more oriented towards a femininity delicate but grittyin line with the dictates of Kaiser Karl

Summer 2016 is the year of the red carpet of the Venice Film Festival where Lily-Rose shows her stylistic figure to the public. Without effective clothes, the young star manages to capture attention without too much effort: black dress, double-layered eyes and soft diva waves

Venice Film Festival: the most beautiful looks and clothes

Lily-Rose Depp is a perfect representative of French-chic femininity. A lover of black (the color she wears for all occasions, even during the day), she prefers short dresses and skin-tight jeans, to be worn with tops that leave the belly uncovered, or transparent bodysuits, like that of the 2016 Planetarium film premiere for which she is was nominated as Best Promise to the Césars

Venice 2019, all crazy for Lily-Rose Depp

2017 opens with a very important catwalk for Lily-Rose Deep which is the latest to come out at the Chanel show of the Haute Couture Fashion Week in Paris with a theatrical dress all flounces, with a very delicate color. Here he is with the stylist Karl Lagerfeld who will die two years later

Voyagers, Lily-Rose Depp and Colin Farrell in the video clip of the film

For the Met Gala 2017 Lily-Rose will wear a bright pink strapless dress, one of her favorite models, and ends up straight among the best dressed of the evening

Regular guest of Chanel events and fashion shows as testimonial and ambassador of the brand, Lily-Rose always wears creations of the French fashion house. Here the hairstyle is simple, in accordance with the minimal but precious dress

For the Met Gala 2019, the Camp-themed one, one of the most famous ever, Lily-Rose Depp surprised everyone with a brand new Chanel look dark and sexy embellished with chains with flower-shaped brooches, part of the Fall-Winter 2019-20 Ready-to-Wear collection

The Venice Film Festival 2019 gives Lily-Rose Depp a real princess moment. The actress is in Italy to present a preview The King in which he shares the set with Timothée Chalamet with whom he will live a love story that will thrill the fans

The Met Gala 2021, which took place exceptionally in September after the pandemic season stopped, once again saw Lily-Rose Deep protagonist in Chanel, a look all in sequins with a crop-top, an element that is never missing in the wardrobe of the actress who increasingly opts for light colors and pink on occasions that matter

Here is Lily-Rose Deep among the guests of the front row of the Chanel show during the Paris Fashion Week last October. For the actress, an ultra-recognizable tweed look from the maison with a double C and wavy hair. Inevitable eyeliner to miss the look