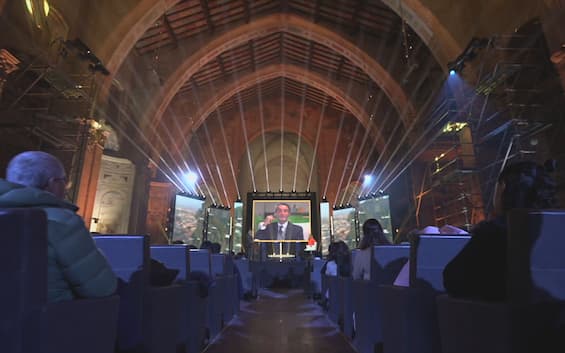 According to Majorino (centre-left), the alliance with the Cinquestelle would be welcome to change Lombardy, while on Qatargate he explains: “An unworthy show”. Moratti (third pole) launches his candidacy recalling “the successes with Expo” to resume that season. Fontana (centre-right) explains that Lombardy remains the engine of Italy and also of Europe, while on the first Covid crisis he explains: “We did our best”

At Live In Bergamo, the three main candidates for the Lombardy Region were interviewed on the microphones of Sky TG24. These are the current governor Attilio Fontana (centre-right), Letizia Moratti (Third Pole) and Pierfrancesco Majorino (centre-left). Majorino and Moratti responded positively to Sky TG24’s invitation to compare candidates for the regional elections in Lombardy, while Fontana said he was ready to evaluate his participation.

Majorino: if there is an alliance with the Cinquestelle, we will be satisfied

According to Majorino, “a big change is needed in Lombardy, a ruling class that does not lose useful funds and puts the development of health care first. We need fresh air in the most polluted region of Europe. If the Cinquestelle are there with us, we will be satisfied, otherwise we will go forward with pride”, explains the centre-left candidate.

“The alliance with the Cinquestelle is an alliance for Lombardy. I have been in difficult international contexts, such as that of Ukraine, and I want to do it again as president of the Region”. Then he continues: “Funds for young people are important, there is a coordination issue between the universities in Lombardy. Young people are the ones who pay the most for the inefficiencies of regional transport. There is a backwardness, a leap in quality is needed. And thank you we had a shock to the kids on the environmental issue, there can be development on this issue”.

Then a comment on the image of politics and corruption after the latest news on Qatargate. “I think we need to be clear. The show of these days is unworthy, the judiciary goes ahead with great clarity. It is serious for corruption and for human rights. We need a straight back against this moral disaster ”.

Moratti: Lombardy is not growing, I will change Milan as with Expo

Letizia Moratti, on the other hand, underlines: “I can be voted because I love my region, I am proudly from Lombardy, the region has extraordinary potential, but it has stopped growing and being among the driving forces of Europe. I changed the face of Milan with Expo, that that you see in Milan has seen me fight for the city. I have brought investments and a visible change, a real estate market that continues to grow”.

Then on the background for the candidacy faded amid the controversies with the center-right, he explains: “Was there an agreement for my candidacy? Yes, but it is now an overcome problem. I believe I can bring results for Lombardy, starting with the reform for the health care that I have carried on. With the Draghi government I had obtained an agreement for general practitioners: 18 additional hours from general practitioners. I am addressing all voters, not just those of the center-right. I want to improve transport in Lombardy, there is inefficient transport, too many penalized commuters. There are the issues of security, growth and employment. I think I know how to do it. I met some investors in London. We hope to be able to invest a billion in the our region”.

And on the alliance with the third pole, he explains: “Enough to win? In Lombardy there is the phenomenon of civic lists, of mayors who govern many countries. There is an ability of civic spirit to join politics. I think that from this point of view there is plenty of room for us”.

Fontana: nobody knew about Covid, did our best. Lombardy is the driving force

According to the current governor Fontana, “the Lombardy Region is still at the top in all numbers. We are carrying out a series of initiatives that show us that we are still competitive and attractive. We are the driving force of Italy, but also of Europe. We managed to overcome the drama of the pandemic. Four billion resources are about to be invested in public works. This gives our entrepreneurs great credibility, the institutions are by their side”.

And on education in the Region, he explains: “We support the world of the University and that of training with great stimuli, we are the most active region. We have increased the number of children in training schools. We have managed to give breath to start-ups. The phenomenon of the return of brains, which have gone abroad and are now returning, is reversed”.

When asked if there are any regrets about the management of the Covid emergency, Fontana explains: “We were the first region of the western world to be hit by a virus of which we knew nothing, we have implemented all the initiatives we thought right, respecting the indications of the central government. What would I have done differently? In retrospect, one could think of something, but we need to contextualize. We were committed to increasing the number of places in intensive care, from 700 to 1800. We tried to cure everyone. In retrospect , more should have been invested earlier in territorial medicine. But now with the Pnrr funds have arrived to invest precisely in this “.