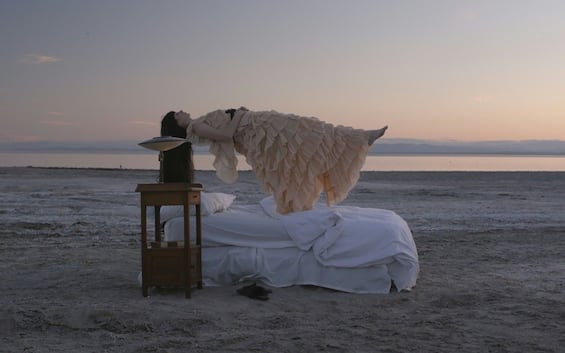 LOCARNO – From the name it seems India (“Bombay Beach”) instead it is America. But not the postcard one. The one that remains on the edge of a – polluted – lake disguised as a sea (Salton Sea, California), but also on the edge of that (American) dream that perhaps no longer exists. The physical place is the one already visited by Gianfranco Rosi in “Below Sea Level” (and it is no coincidence that his name is among the first to appear in the list of thanks in the credits); the place, of the heart, is instead halfway between the communities of adults / seniors told by Jessica Bruder in “Nomadland” (“Only that here the protagonists live permanently what remains of Bombay Beach”, says director Susanna Della Sala) and the artistic carnival of a Burning Man remained on a human scale, true, not yet inflated. From this strange but explosive mix comes “Last stop before chocolate mountain”, the only Italian work presented in that Semaine de la Critique that showed much more than a jewel. And this is also the work signed by Susanna Della Sala, who recognizes the “debt” to Rosi’s work but is determined to underline the differences: “He has chosen to tell a place almost journalistically, I wanted to bring more to the fore a feeling, transferring my feelings and experiences to the screen in the encounter with this community. Bombay Beach – continues the author – represents for me a universal and metaphorical place in which we confront ourselves, awakening our impulse creative, in the mirage of individual liberation.

The film contains the collective longing, desperate and joyful at the same time, for acceptance and a sense of belonging. “The themes that the film touches on – from ecological tragedy (of a now toxic lake) to the search for a lifestyle alternative (“the way to a different life”) – they ensure the relevance of Della Sala’s work but it is in its purely artistic, cinematographic and visual component that “Last stop before chocolate mountain” gives its best. disparate (and sometimes desperate) are all united by a single destiny: that of seeking / finding a healing in the “regenerating power of art”, which is expressed with words scribbled in a diary or through the construction of gigantic installations created with materials of The result is a portrait that remains deliberately suspended “on the edge” – on the edge of big cities (less than three hours’ drive from Los Angeles or San Diego); on the edge of society (which in some cases has the protagonists of the story were expelled and in others she was deliberately refused); on the fringes of everyone’s individual lives (often derailed for different reasons). Yet “Last stop before chocolate mountain” is not yet another film about drop out, on the defeated, on the beaten (“beat”) because at the heart of the film there is art and its power of rebirth, whether of a place or of each of us. A power that is felt strong even in the final scenes of Della Sala’s work, in a series of well-chosen ones tableau vivant between lake and desert, between reality and fantasy, between life and art.