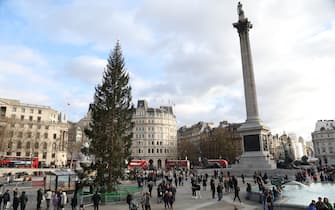 Irony and some controversy about the Christmas tree in Trafalgar Square, London: someone called him clumsy, anemic, skeletal. All criticisms reminiscent of a 2017 case: that of “spelacchio”, The famous fir tree in Piazza Venezia, in Rome, also defined as ugly and dried out

WATCH THE VIDEO: New York, the Christmas tree lights up at Rockefeller Center

But the London fir risked also create a diplomatic incident: the tree under accusation, in fact, is the traditional Norwegian fir which since 1947, every year, Norway gives to the United Kingdom to thank for the support obtained during the Second World War

Super Green pass, the rules for moving between regions at Christmas: when needed and when not

Someone pointed out that this year the gift was poorly managed to say the least: the tree has attracted so much criticism that the Oslo city council is considering whether to send another one to London

Covid and Christmas holidays, from masks to tampons: here’s how to behave

On social media, someone has ventured that it could have been the revenge of the Norwegians for the dismissal of compatriot Ole Gunnar Solskjaer as manager of Manchester United

The Westminster City Council immediately intervened to defend friendly relations with Norway: “I don’t know what a tree 20 meters tall and 90 years old looks like, but it will certainly be different from the one you have in your garden,” said a spokesperson.

A Norwegian reporter, Gry Blekastad Almas, assured that there was nothing personal about the ill-fitting gift and simply explained that some branches simply snapped in the transport

In Oslo a councilor, Anne Haabeth Rygg, speculated that the Norwegian capital pays for the cutting down of a new tree in Britain, rather than sending another one that may not arrive in time for Christmas (fir trees are transported by sea and then by truck)

While on sending a new tree, the mayor of Oslo, the socialist Marianne Borgen, said she will vote against: the one sent “was not the Disney tree, nor a plastic tree” but a specimen from a natural forest – she ruled – and “it was to be expected that it would have an uneven appearance”