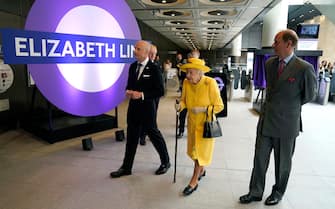 There Queen Elizabeth today she went out a surprise to participate in the ceremony for the conclusion of the works in Paddington station of the new London Underground line named after her, theElizabeth Line

London Metro, the new Elizabeth Line will be inaugurated on May 24th

After a few years of delay and postponements related to the pandemic, the new line will open to the public on May 24just in the year of the celebrations for the Platinum Jubilee of the sovereign

The visit to Paddington was presented as a surprise and a decision of thelast minute also in the short official statement of Buckingham Palace which gave the news: “With a happy positive development Her Majesty the Queen attended the event today for the completion of the works of the Elizabeth Line. Her Majesty was aware of this appointment and her organizers had informed her of the possibility “of welcoming her.

This is the third exit these days for the 96-year-old queen who, after being delegated to her son Carlo to read the traditional Queen’s Speechhad reappeared in public at the Royal Horse Show, hosted in the grounds of Windsor Castle, on the occasion of the celebrations for his 70 years of reign

UK, Carlo replaces queen at the opening of Parliament

Queen Elizabeth appears in public at an event for her Platinum Jubilee. PHOTO