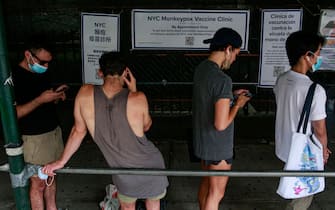 In the last month the cases of monkeypox to New York have increased exponentially, from 10 to 461 in few days. The city opened the first vaccination centerswith thousands of residents queued despite the scorching heat

The American metropolis beyond eight million inhabitants has recorded 461 cases of monkeypox since the outbreak began in May with a peak last week, at the start of which the total cases were still 230

The health commissioner of New York City said the city “is fighting against two pandemics at the same time”, After a poor supply from vaccines it’s a slow apparatus of test they have not been able to contain one of the largest outbreaks of monkeypox ever recorded

Smallpox monkeys, from WHO urgent appeal to Europe

Smallpox of monkeys, cases increase: + 62% in a week

They were originally planned 9,200 doses of vaccine, but in seven minutes they had all already been book. The health authority then proceeded to provide others 4,000 doses of the drug, but the question remains far superior to the offer

Covid in Italy and in the world, the latest news

The focus remains highalso because a New York the number of cases doubles every five daysand the city represents by itself a quarter of total infections detected in the United States, and the 2% worldwide

WATCH THE VIDEO: Monkey pox, queues in New York to get vaccinated

On Friday the last survey, with the number of infected arrived at 461an increase of 19% compared to previous day. According to the data, the 95% who has contracted the infection is man

Currently, according to what is reported by the health department from New Yorkcan book for vaccination only “gay, bisexual or other men who have had casual sex with other men in the past 14 days”

The press agency Afp interviewed some New Yorkers lined up for the vaccine, many of whom said “lucky for finding a place on the waiting list, still being relatively few the doses available in the city ”

Many have complained about the inconvenience due to the difficulty in reserve the vaccine online: “The site is stuck for too much traffic, ”said a man standing in line. “But the drug is already there and the vaccination should be more efficient to prevent the infection from becoming a serious problem”