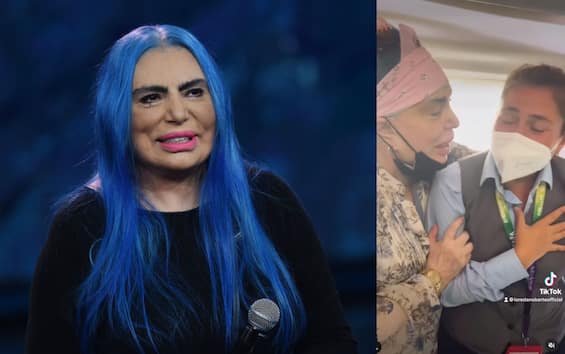 Meeting your idol is always a special emotion. At whatever age this happens. The diehard fan of Loredana Bertè, who in front of her favorite singer could not hold back her tears. The scene of the meeting with the interpreter of “You are beautiful” was filmed with mobile phones and then shared online, on social media by Bertè herself, where in a few hours the views and likes were tens of thousands. The meeting took place on board a train Red Arrow which brought the singer from Milan to Pescara, from where Loredana Bertè would then move to start the summer tour with a concert in Roseto degli Abruzzi.

The meeting on the train

On 4 August, in fact, the singer was expected in the well-known tourist resort of Abruzzo for a concert by thousands of people and, for the move from Milan to the capital of Abruzzo, Loredana Bertè chose to travel comfortably by train. In a video posted online, the singer explains that she asked her manager the courtesy to go to the bar on board to get a toast for a snack. However, after realizing that there were no knives to cut the toast in half, she did manager of the bar she went personally to Loredana Bertè’s carriage with the trolley of drinks to offer one to the singer as a sign of apology for the inconvenience. But the woman did not know that by doing so she would meet her idol. And when she realizes that the passenger who claimed the toast was Loredana Bertè, she bursts into tears.

The story of Loredana Bertè

The singer gives an excited and moving account of that meeting that deeply touched both the manager of the bar and Bertè herself, incredulous in front of her fan’s strong emotion. “Unfortunately the train, besides being in 30 minutes delay, it was not equipped with knives to cut my huge toast in half, nor with plates, nor with bags to carry it. After a few minutes, the manager of the bar, on her own initiative, passes by our carriage to offer us a drink, apologizing for all the inefficiencies and finds me! When she briefly saw me she doesn’t faint: when the karma it pays you back instantly ”, writes Loredana Bertè, who is also moved by the woman’s tears.

The video of the online meeting

In the short clip published by Loredana Berté on TikTok, the singer is seen hugging the woman visibly moved and unable to stop crying. The surprise of finding her idol was really overwhelming for the woman, who despite Loredana Bertè’s attempts to reassure her, she could not understand what was happening to her. “This is a very dear fan of mine. He is trembling because he didn’t know he was meeting me. I’m sorry because you are very upset. Now stay close to me, stop crying. There is a crazy queue, now they beat us ”, says the singer in the video, in an attempt to dampen the tension. Surely a good certificate of esteem for the singer and an unforgettable emotion for the woman.