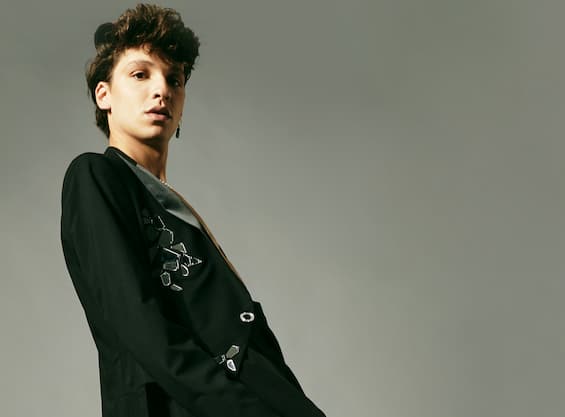 Arrive tomorrow, Friday 14th October, I want the skirt, the new unreleased album by Luigi Strangis, the young singer-songwriter and multi-instrumentalist from Lamezia Terme, winner of the 2022 edition of Amici. The disc (label 21co and distributed by Artist First) is already available for preorder at this link, in an autographed version on Amazon and in a limited edition autographed CD bundle and sweatshirt on musicfirst.it. Already from the image on the cover, which represents him with the skirt, Luigi Strangis it lets us understand that each of us must be free to be able to best express himself, his nature and his dreams and be able to pursue them without the caging of stereotypes; in short, his generation feels free and makes no distinctions.

Luigi let’s talk about the origin of the album: when did you start thinking about it and how did the project develop?

The idea came immediately after Amici, at first it was just a thought but then with the days it took concrete form. It transmits a powerful charge because it is affected by an intense period, all the pieces were born between July and August except Traces of you which begins to take shape during Amici.
The texts oscillate between the light-heartedness of the twenties and the desire to be oneself, free from social conventions: can I consider it a generational manifesto?

It can also be because I, like all my peers, want to be myself and resume living after the two years of closure: we have to find normality, we seek simplicity.
Let’s start from Words of Plastic: you have already deleted me … but what can you delete a love in the time of social media?

It is enough just to block the right contacts, I admit that it is very difficult but if you want to do it you do it; if you think about it, it also happened with letters: you could keep them or throw them away or even burn them.
Could your plastic words be the evolution of Carmen Consoli’s butter words?

Why not? Shiny eyes it is a passage that reminds me of the words being said in a car but they are worth nothing. And in any case, the approach to Carmen is an honor.
Do you like being called a heartbreaker?

It depends, in moderation.
Always in Who cares you talk about going to America one night: does the American dream still exist for your generation or are dreams now in other places?

Dreams are everywhere today, certainly America is the one that moves the most curiosity among young people and therefore I say that someone still cultivates it.
Your two non-return tickets, what destination do they have?

They enclose that desire to escape but not only physically, also from the context in which you live; when you find the right person, but who is the right one, you already enter your own world and it is already running away.
Floral dress And kiss in the mud it’s a real Woodstock postcard: would you have liked to have been twenty between the sixties and seventies?

I always said I should have lived them, there would be a lot of fun. If I had a time machine I would go back to Woodstock. And then I would see some heavy gigs.
There is the small room in the house of his gods Who caresthen there’s yours like a dump in Strange: Is there a room in your life tailored to… Luigi? Or is that exactly why you started drawing walls with your hands?

My bedroom exists and is really a landfill. But I also draw them with my hands: what is on my head goes on a wall and it is as if I were building something new and mine.
Do you really feel safer with your back to the wall? And do you really take Grandma to dance?

It is a strange text that you quote. My grandmothers are very active and I would take them to dance, maybe the smooth. Then it’s better with your back to the wall, you feel safer, it’s a state of mind.
As it used to be when there was time: the speed of this era do you have the feeling that you steal the beauty of slowness? Or is it a drawback of a life without rules that can give you 40 degrees at Christmas?

It would be nice to slow down a bit, I wouldn’t see anything wrong with it, but the world is like this and we have to follow the wave. Of course 40 degrees at Christmas are beautiful!
Have you ever attached a padlock with a name next to yours?

Only once, but I don’t want to remember it.
In my opinion, a recurring theme is that of distance, both physical and internal: do you often feel late or too early?

Yes, I often feel a little late. I would like to go back in time, I told you, maybe it wouldn’t be better but it would be cool to live it. However, I am never in advance.
We start with shining eyes and end up with distorted tears: at least have we erased some scars?

They are hardly erased but you can cover them. And a few pebbles from my shoes were removed but always with respect.
What will happen now: the instore, the concerts in Milan and Rome and then?

We never stop, later we will understand how to organize a tour, now I want to do the two dates in Milan and Rome, so much played and so much rock and add some acoustic songs: the child in the room opens the doors of his room!