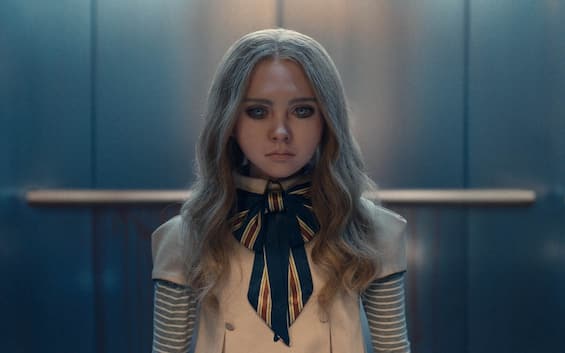 Imagine HAL 9000’s Space Odyssey end up in the body of a killer doll like Chucky. Combining our fear of artificial intelligence with that of certain puppets that we would never want to take their own initiative. The recipe behind M3GANthe latest creature of the factory blumhouse, is as simple as it is effective, at least according to the US box office. The film, which arrived in our latitudes on January 12, quickly became an authentic case in the States, where it grossed 30 million dollars in its first opening weekend alone, placing itself in the standings behind only the unattainable kolossathe Avatar 2. Too bad that, compared to James Cameron’s film, M3GAN has a really ridiculous budget (with which the director of Titanic would pay for the catering).

A pink apostrophe between Annabelle and Terminator

“Minimum cost, maximum yield”. This is the motto of the couple formed by Jason Blum and James Wanwho returns with this film to collaborate after the lucky one insidious. Wan is also the author of the subject of M3GAN which, it must be said, is not exactly the most original in the world: an expert in robotics (Allison Williams) finds herself having to tutor her eight-year-old granddaughter, who has suddenly become an orphan. Given her inability to care for the child, she decides to build an android with one clear task in mind: to make sure that little Cady is always safe. The idea would not even be bad, so much so that it is even thought of marketing M3GAN (or, if you prefer, “Model 3 Generative Android”). It’s just a pity that our ballerina Chucky takes her mission a little too seriously, turning into a death machine that not even #17 and #18 can handle. Dragon Ball to save her friend. Forget about the tender David protagonist of the Spilbergian AI: Artificial Intelligence. M3GAN has nothing in common with an innocent hi-tech Pinocchio, it is rather a lethal cross between “Annabelle and Terminator”. The definition is by James Wan who, developing the subject of this idea, was able to give vent to one of his passions: the one for killer dolls, which in one way or another crowd his entire filmography from the aforementioned Annabelle as far as Saw and to the puppet of dead silence.

To help Wan in drafting the story was the screenwriter Akela Cooper, who also handled the script. The world of killer dolls was definitely newer for her to explore, as she revealed to Deadlines: “In my previous films, dolls don’t kill. I said to myself, let’s make a killer doll movie for a new generation that didn’t grow up with Chucky the way we did.” Cooper later revealed that the film was being written to be much gorier, “the number of victims in the script was much higher than in the film”, leaving open the possibility that an uncensored version of the film will soon be released. However, it should be noted that the choice not to go too far in gore and pure horror moments seems to be paying off, given that the critics are loving M3GAN especially for his ability to mix fear with a heavy dose of black humor. Probably the hand of the director, the New Zealander, also influences the tone of the film Gerard Johnston, already behind the 2014 horror comedy Housebound. The Guardian called the film “unabashedly funny,” forgiving the film all its shortcomings. He did exactly the same as the film magazine Empire: “Is it plausible? Not particularly. When humanity reaches the epochal milestone of having a self-aware artificial intelligence, it probably won’t happen in the basement of a person who sells Furby for a living. Does the idea appeal, however? You bet,” reads Al Horner’s review.

Horror with a sci-fi twist

In any case, some small imperfections should not make one move away from an entertainment product that works properly as such. As evidenced by the Guardianunder the patina of horror tinged with comedy, reflections are also hidden on deeper themes: they range from our inability to manage the technological process to the equally chronic problems that we experience when we find ourselves having to take care of another person. M3GAN, giving a sci-fi allure to everything, gives a breath of fresh air to a vein where until now almost all the murderous puppets were moved by paranormal powers. M3GAN no, the blond android is a product of the human mind and perhaps for this reason he is more restless, even if the bulk of the film is set in full light.

The success of a film-meme

However, it should be noted that a large part of the success of the film is perhaps due to a pervasive and very successful promotional campaign, developed above all through social media. Kate Knibbs defined on Wired M3GAN “a meme film” and it is objectively difficult to blame her. The ballet of M3GAN has flooded the internet well before its US theatrical release on January 4th. The doll has become an icon without even having to actually appear on the screen: the somewhat kitsch trailer released in October was enough to make the evil robot depopulate on TikTok and in Halloween parties. Even on Twitter, everyone has seen the videos in which a series of M3GANs dance in iconic places such as the Empire State Building or the New York subway, having a first idea of ​​what that character was even before going to the theater. Today even VIPs love M3GANstarting with the almost homonymous rapper Megan Thee Stallion: ”I don’t want to be biased, but this film was made for me. I’ll be first in line at the cinema, M3gan.” The feeling is that the macabre dance of death with which we have known the cruel doll will continue for a long time. The music is far from stopping and M3GAN he certainly has no intention of doing that. The possibility of an upcoming sequel is not even listed.