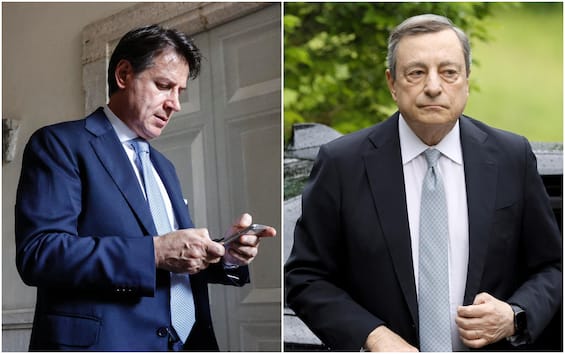 There is controversy after the sociologist De Masi told the Fatto Quotidiano: “Grillo told me that Draghi asked him to remove Conte from the M5S because it was inadequate”. The former premier: “I was baffled. Our attitude does not change, our goal is not to support Draghi, it is to protect the Italians ”. Grillo: “Cover the truth with your stories”. The Prime Minister: “We spoke to Conte, we began to clarify, the government does not risk”

“Grillo told me that Mario Draghi asked him to remove Giuseppe Conte from the M5S, because it was inappropriate”. To unleash the storm is a statement issued a Daily fact by Domenico De Masi, emeritus professor of Sociology of Work at the Sapienza University of Rome and scientific coordinator of the M5S training school. Words that led to the harsh reaction of the former Prime Minister: “I would like to specify that Grillo had told me about these phone calls, I would like to clarify that we are a community, we work together. , interferes in the life of political forces that support him for something else “. While Grillo, when asked about De Masi’s words, replies: “Cover the truth with your stories”. Mario Draghi also spoke from the NATO summit in Madrid in the afternoon, assuring that with Conte “we spoke, we will see each other as soon as possible” and that “the government is not taking risks”.

Conte: “I am bewildered”

Conte said he was “disconcerted” by the rumors about an alleged request by Draghi to Grillo to remove him from the Movement: “Up to now we have always supported and continue to support him with loyalty, fairness, not hiding the difficult passages for us, which give us suffering. I was genuinely disconcerted. ” But he ruled out a crisis in the majority: “Our attitude, which I have always defined as loyal, constructive, correct towards the government, does not change even in the face of episodes that I consider so serious. Because our goal is not to support Draghi, ours the aim is to support and protect the interests of Italians “.

Conte: “They attack me to destroy the Movement”

“With loyalty and fairness, we have always pushed the government to be a protagonist in Italy and in Europe – continued Conte – And we push it to be the protagonist of peace calls in international fora, aimed at solving the problems of Italians, for the expensive bills . Well, we did not imagine that there were also this type of phone calls “. Then he said: “I am attacked daily to destroy the Movement. It is there for all to see, I personally and the Movement are under attack, because some positions are not part of the widespread, dominant thought “. And so he concluded: “Here the values ​​of democracy are at stake. Political forces are the pillar of our democratic institutions. Someone who can enjoy or laugh at these passages would be wrong ”.

Draghi: “We spoke to each other, the government does not risk”

Mario Draghi’s reply came from Madrid, where the premier attended the NATO summit. “We spoke with Conte a little while ago, we began to clarify each other, we resent tomorrow to see each other as soon as possible”, said the Prime Minister, who then assured: “The government does not risk”.

Grillo: “But what is this thing about Draghi and Conte …”

“But what is this thing about Draghi and Conte …”. Thus the guarantor of the M5s Beppe Grillo, leaving the Senate, intervened on the matter. When asked if it is serious that Prime Minister Mario Draghi speaks ill of the president of the Movement Giuseppe Conte, from behind the car window Grillo made a gesture with his hand as if to say ‘but what are you saying’. Ansa reports it. Grillo should return to the Forum hotel where he is planning a meeting with the delegation of the Movement in government.