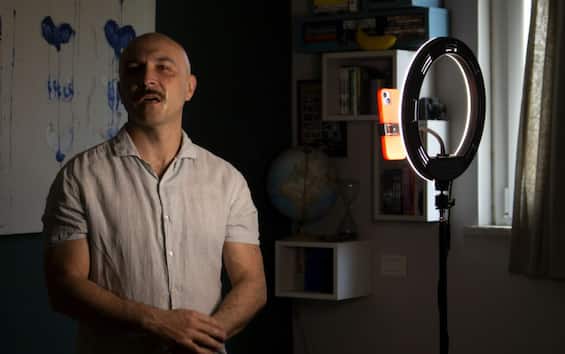 The now legendary Maccio Capatonda is the protagonist of Maccioversethe original series in which you can interact with the characters of the show by creating your own avatar.
This is an innovative and very interesting project, something that is unprecedented, especially for what happened yesterday, Sunday 25 September: for the first time there was the premiere of a TV series entirely in the metaverse (which happened thanks to Somnium Space).

From today, Monday 26 September, the five episodes of Maccioverse, series in which the comedian and author named will be accompanied by colleagues Myriam Lugarà (Myriam), Valerio Desirò (Valerio), Pippo Lo Russo (Pippo) and Luca Confortini (Luca). This is the cast of the show, now streaming on the Elisium platform.

Maccioverse is presented by the new Italian telephone company Elimobile, which from today will offer its customers Elivision, a new app for smart TV with which it will be possible to enjoy all the exclusive contents of the platform.

You can watch the official trailer of Maccioverse in the video you find at the bottom of this article.

The first premiere of a series entirely in the metaverse

Sunday 25th September was the very first premiere of a series entirely in the metaverse. This happened thanks to Somnium Space, a Czech company that deals with the development of its own metaverse based on blockchain technology.

The first episode of Maccioverse inside a virtual cinema. The public was able to participate in the event without being physically there: it was enough to create their own avatar to virtually attend the premiere. And it was also possible to interact with Maccio.

You simply accessed the Somnium site, registering and creating your avatar, then clicking on the “Visit popular Parcel” button and selecting the location where the premiere of Maccioverse.

Maccioverse was born from an idea of ​​Maccio Capatonda (born Marcello Macchia). He is one of the many authors who have worked on this project: Danilo Carlani, Clemente Meucci, Andrea Mancini and Luigi Luciano (Herbert Ballerina) collaborated with Maccio on the screenplay, while the direction was always led by Capatonda. , flanked by Danilo Carlani and Alessio Dogana.

The production is entrusted to Micidial and the executive production to Freak Factory. For Elimobile, the project is curated by Clotilde Zomparelli, Head of Research Talents & Creation Development Contents.

Saturday 24 September Maccio Capatonda was a guest at the FeST, the Festival of TV Series held in Milan. The actor spoke about this series, to which a panel was dedicated at the Triennale.

Maccioverse tells about Maccio, which we see here as a 2.0 worker. Incorporated in the technological tools that on the one hand are very useful but on the other turn out to be destructive, the protagonist is stuck in a continuous flow of work calls, screen freezes, back pain from a sedentary lifestyle and side effects caused by this lifestyle. (which now unites almost all of us).

Maccio will find himself grappling with a challenge: trying to extricate himself between the virtual and real world to face an adventure that is a bit like the adventure of all mankind in the New Millennium.
Set in Rome in a dystopian future à la Black Mirror, Maccioverse speaks of today (and – unfortunately – also of tomorrow). The series tells how society’s tastes, habits and even feelings will change due to technology. The latter is a double-edged sword, something redeeming on the one hand but also what makes us slaves.

You can watch the official trailer of Maccioverse in the video you find below.