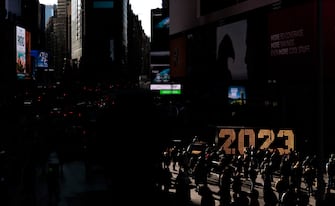 He touched a terrorist attack of Islamic origin a Times Square New Year’s night. L’assault by three officers with a machete it no longer seems like the gesture of a madman but is taking on the contours of the violent action of a recently radicalized lone wolf. According to what is reported by the New York TimesTrevor Bickford, the 19-year-old arrested after the attack, had left his home in Wells, Maine, to go to New York and hit the police in an act of Islamic terrorism

So far the young he was charged with assault and attempted murder but according to the American daily he risks being indicted also for terrorism. Before the assault, the young man had written a letter of will and farewell to his family in his personal diary, where he also expressed his wish to join the Taliban in Afghanistan and die a martyr. In the photo the preparations in Times Square before New Year’s Eve

The revelations of the NYT on the case

Bickford also evoked his brother, who works in the US army, criticizing him for wearing the uniform of the enemy. The FBI is rebuilding his life: High school athlete, where he was a mid-level student, award-winning artist, the young man had lost his father to drugs several years ago. In the last year and a half he was converted to Islam

He had also decided to leave the United States. The final destination was Kabul. His family had alerted the police. According to Cnnfurthermorethe FBI had questioned him in mid-December and had him placed on the watch list

His target was the police: during checks at a checkpoint to enter the square before the party, he pulled out his machete and hit two officers on the head, one of which on the first day of service (both were discharged). One third however, he had the readiness to fire, wounding the assailant in the back. In the photo, the celebrations in Times Square

New Year’s Eve 2023, from New Zealand to New York: parties and celebrations around the world. PHOTO