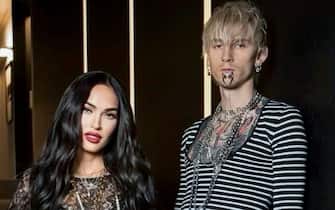 Machine Gun Kelly and Megan Fox were in Milan, at the Dolce & Gabbana fashion show.

The rapper first walked the runway in a silk suit consisting of a sparkly double-breasted and pointy white patent leather shoes, then performed in a black sequined dress.

Machine Gun Kelly and Megan Fox get married: the video of the proposal

The singer also performed many of his best songs, playing organ and guitar, closing with “Bloody Valentine”.

Megan Fox, in black pants and lingerie bodice, applauded her companion in the front row.

Megan Fox, a star between music and cinema

Megan Fox and Machine Gun Kelly, real name Colson Baker, announced they got engaged a few days ago. The rapper asked his partner to marry him, giving her an emerald and diamond ring.

Taurus, Megan Fox in the cast of the film with Machine Gun Kelly

The couple at the Dolce & Gabbana fashion show.

Megan Fox and MGK pose for the cover of GQ

Megan and Machine Gun Kelly for lunch in Brienno, a village of just over 300 inhabitants on the western shore of Lake Como.

One of Megan Fox’s Milanese looks.