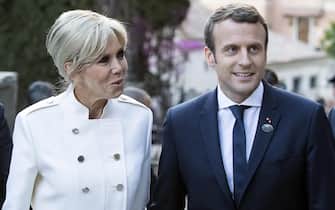 Emmanuel Macron and Brigitte Marie-Claude Trogneux they were both born in Amiens in the North of France: he on 21 December 1977, she on 13 April 1953

WATCH THE VIDEO: Eliseo 2022, Macron’s rally for the presidential elections

They met in 1993: he is a 16-year-old student, she teaches French and Latin at the Providence high school in Amiens, in the north of France

ALL THE NEWS ON BRIGITTE MACRON

The first meeting takes place during a theater course in 1993

ALL THE NEWS ON EMMANUEL MACRON

In 1993, Brigitte Trogneux is married to the banker Andrè Louis Auziere and has three children. The second, Laurence, is in the same class as Macron

THE SPECIAL OF SKY TG24 ON THE FRENCH ELECTIONS

When in 2014 Macron became Minister of Economicsa under the presidency of François Hollande, she quits her job as a teacher to devote herself to her husband’s public life

The race to the Elysée begins on 6 April 2016, when Macron launches the “La République En Marche” movement

Macron wins the presidential elections on 7 May 2017. On stage with him, to celebrate the success, the new première dame Brigitte

May 14, 2017 is the day of handover by François Hollande to the new Emmanuel Macron

At the end of May 2017 there is the first international commitment for couples: the G7 in Taormina

In the photo, November 13, 2017, on the occasion of the second anniversary of the terrorist attacks in Paris

The first state visit to the White House for the French president takes place in April 2018. Melania and Brigitte are both dressed in white

Emmanuel Macron and Brigitte are at the Lužniki stadium in Moscow for the final against Croatia, won by the transalpines 4 to 2

In 2019 they welcomed the President of the Italian Republic Sergio Mattarella and other leaders and heads of state, in France, for the funeral of the former French president Jacques Chirac

In the 2020 they have always been together on various occasions as the outbreak spread COVID-19. In September, the couple visited there for two days Latviafor official meetings in Riga, strictly wearing a mask

In 2021 Brigitte accompanied Emmanuel Macron to Italy on the weekend of 29 and 30 October on the occasion of the G20 in Rome. The couple visited together the exhibition of French photographer Natacha Lesueur at the French Academy in the capital

Macron decides to reapply for the 2022 French presidential elections, Brigitte also in this case is at his side during the electoral campaign. “I thank those who have not chosen this life – Macron said during a election rally in Nanterre – but that they are close to me every day. And in particular she”, added the president visibly moved looking at his wife, “she is the one who gives me the most”

The last two years of Macron’s first presidency they were complex, inevitably marked by the Covid-19 pandemic that hit the whole world and, more recently, by the outbreak of the conflict in Ukraine after the Russian invasion